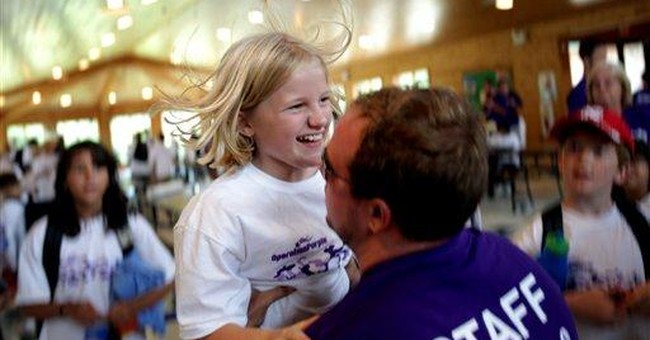 Editor's Note: A prior version of this column was distributed by Cagle Cartoons in 2007 and 2013. If you run this column, please mention that it is an excerpt from Tom Purcell's new book, "Comical Sense: A Lone Humorist Takes on a World Gone Nutty!" available at amazon.com.

It's been almost three weeks since you dropped me off at summer camp. You better come get me 'cause I'm in big trouble.

On my first day, I was feeling homesick. So I found a piece of wood and began carving it with my Swiss Army knife the way Daddy showed me.

Well, one of the counselors yelled at me to "freeze." He took my knife, then patted me down. Then he marched me off to the camp director. The director said, who did I think I was bringing a lethal weapon, a symbol of pain and death, into her camp? Then she gave me a "verbal warning."

One day, Billy Johnson and I got bored, so we went into the woods to play. We turned a couple of branches into guns and made bullet noises as we fought the bad guys. Sure enough, we got marched off to the director. The director said there's so much war in the world because boys like us are taught to "celebrate" it from an early age. She said we should be ashamed of ourselves and that we were lucky she wasn't sending us home.

So I figured I better stay out of trouble. But then I got in trouble at lunch. I began to say grace out loud, just like you taught me, and I was carted off to the director again.

She wanted to know who I thought I was imposing my beliefs on others. She said my actions showed how "ignorant" and "insensitive" Americans are to other cultures; then she gave me another warning.

Believe it or not, things got even worse. We were weaving baskets and I was sitting next to Mary Allison, the prettiest girl I ever saw.

Well, sure enough, I was carted off to the director again. She said I really crossed the line this time. She said my behavior was not only "boorish," but against the law. She said I should be sued for sexual harassment.

By the way, what is a "gender terrorist"?

I was pretty uptight by that point. But I was able to forget about it when we played kickball. I kicked the ball really far and I got a grand slam. I was so happy, I said, "We win! We win!"

Sure enough, that got me another trip to the director's office. This time she said I was "insensitive" to the players on the other team. She said I hurt their "self-esteem." Then she asked me if you and Daddy are Republicans.

By this point, I figured I'd better just keep to myself. So I got a jar out of the cafeteria and went into the woods. I caught a bumblebee in the jar and put some flowers in there to keep him happy. I was poking holes in the top to let fresh air in when I was hauled off to the director again.

This time, she was really mad. She said, who did I think I was giving a "death sentence" to an innocent bee? She said I had no respect for the Earth and that it was people like me who were responsible for climate change. She said I'll be lucky if the world doesn't end before I collect Social Security.

She said I better get with the program — that there is no place in this world anymore for "thoughtless," "restless," "insensitive" boys like me. She said if I mess up one more time, she was kicking me out of the camp.

By the way, what is Ritalin?

Anyhow, you better plan on coming back to get me. Tomorrow everybody is going for a hike in the woods. And I already picked some flowers to give to Mary Allison.