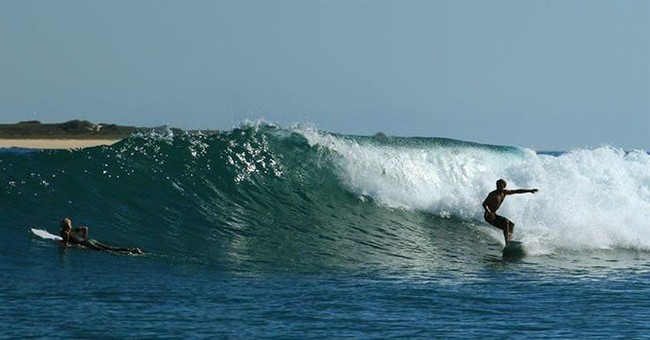 Ah, the middle of February. We all know what that means: Sports Illustrated's swimsuit issue has arrived.

That means that some folks, such as those in the American Decency Association (ADA), will voice concerns about exploitation of women.

"Sports Illustrated DISRESPECTS women by displaying demeaning stereotypes of female sexuality," says the ADA's website. "The swimsuit issue features women models posed not as athletes of strength, skill, and endurance but as playthings ..."

That may be true, but here's what is also true: We men are also being exploited here.

Look, it's winter. We men have suffered a few weeks without football. With free time on our hands, we find ourselves lost in self-examination.

We fret over our winter flab. We wish we'd chosen different career paths. We fear we'll never amount to anything worthy.

The Sports Illustrated people understand our woes all too well.

Every year, the swimsuit issue uses the same simple formula to exploit us: stunning babes who roll around in the sand, dance on the beach and cling to their skimpy duds and curvy parts as they are hit by waves.

Sure, in our overly sexualized culture, these female models may be suffering exploitation. But aren't they exploiting us men, too?

Many of the women who pose for the magazine are thrust into supermodel status. The ones who make it onto the cover earn a fortune in endorsements. And many of them go on to date and marry some of the world's richest men.

But what do we average fellows get out of the deal? We get the satisfaction of knowing that we'll never marry, let alone talk to, such world-class knockout beauties.

That makes us even more depressed.

So we go to cheesy restaurant chains where waitresses wear short shorts and low-cut shirts and exploit us all the more.

The coy lasses touch our arms delicately. They give us flirtatious glances. They talk softly and sensuously, the way women do when they know men are about to hand them gobs of money.

One of my poor, baldheaded friends falls for this ruse at least four times a month.

Despite being coated in hot-wing sauce and stale beer, he is convinced his waitress digs him. His waitress encourages this fiction and is rewarded with a 50 percent tip.

I think I speak for average fellows everywhere when I say I resent that.

I resent that some women deliberately target us for our money and are so good at parting us from it.

I resent that some waitresses can so easily take advantage of hapless, simple-minded men by plying us with a few beers.

I resent that Sports Illustrated packs its swimsuit issue with photos of some of the most physically beautiful women in the world, knowing that's all the magazine has to do to get us to buy it.

Yeah, our culture places way too much emphasis on physical beauty and sexiness. Young girls are taught by the media that the chief way to win a male's attention is through provocative clothing.

None of this is good.

And neither is it good for my middle-aged, hair-challenged friends to be taken advantage of by big media outlets and big restaurant chains.

It's no wonder I feel so disgusted every year when I go to the store to purchase the Sports Illustrated swimsuit issue.