Obama Critics Too Late, Not Too Little 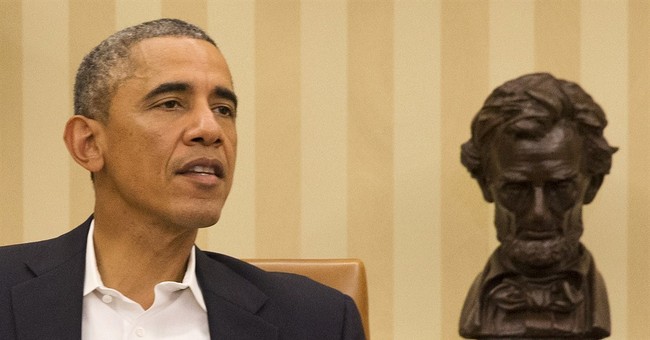 I'm starting to feel bad for President Obama, if you want to know the truth.

??His poll numbers are so low - an IBD/TIPP poll indicates that 53 percent of adults in the United States now characterize Obama's presidency as a "failure" - no Democrat candidates want to be seen with him.

??Former CIA chief and Defense Secretary Leon E. Panetta has been blasting Obama all week. Panetta, "long a trusted advisor to Democratic presidents, released a book about his years in the administration in which he criticizes President Obama as a vacillating leader who often 'avoids the battle,'" reports the Los Angeles Times.

??Just when you think things can't get worse for Obama, Jimmy Carter criticizes him. Carter says his foreign policy is wishy-washy.

??What will happen next? Obama's dog Bo will leak unflattering stories to the National Inquirer?

??So it is chic all of a sudden for erstwhile supporters to criticize the president for one failure after another.

??Sure enough, Obama promised hope and change. He promised to cross the political aisle and work with the opposition party - but has been one of the most polarizing and divisive presidents in my lifetime.

??Sure, Obama promised to be more transparent than any president in history - but has been one of the most secretive in history. Don't ask me; ask the Society of Professional Journalists why it wrote a letter to the president, demanding the transparency he promised.

??Sure, the Obama administration is bungling a number of things at home and abroad. ObamaCare has been messy and costly and continues to fall far short of its promises. And nobody is confident the president can correct huge foreign policy blunders when Obama tells Democrat supporters, "There's a sense possibly that the world is spinning so fast and nobody is able to control it."

??My only question to the president's growing number of critics is this: Where were you before Obama was elected - twice?

??Prior to Obama's first presidential election, I took the time to look into his record and accomplishments and was surprised to discover how paper-thin his resume was - for a presidential candidate, that is.

??Sure, he attended fine schools. But we know very little about what he thought, wrote or accomplished while he was there.

??He was a community organizer, lawyer, university lecturer and state senator, but there are no grand accomplishments that stand out in any of these roles - at least not the kind that cause people to think "that young man is going to be president one day!"

??He began running for president one year into his term as junior senator of Illinois and rarely showed up to cast votes. That's like being hired as a director of a company and immediately asking to become CEO.

??He had no experience running a large organization - a modest record that showed he would cross the political aisle to get things done or effectively organize executive teams to roll out big, successful programs.

??Nobody seemed to care, though. Because he was masterful at giving speeches. When people weren't fainting at campaign rallies, they were praising him as a great savior who would solve America's many challenges.

??Unfortunately for everyone, however, Obama turned out to be a mere mortal.

??And now his supporters complain that he doesn't much like the political process - rolling up his sleeves and working behind the scenes to get things done. To the contrary, he's aloof and a bit of a loner, they say.

??So while it is suddenly chic to pile on and criticize the president's shortcomings as a leader and commander in chief, I think the new critics should back off.

??If you folks had examined what he promised to do before he was president - if you really examined his experience and skills - you would not be terribly surprised by the outcome.

?Your criticism is too late and you aren't likely to change this president's mind anyhow. So put a sock in it.