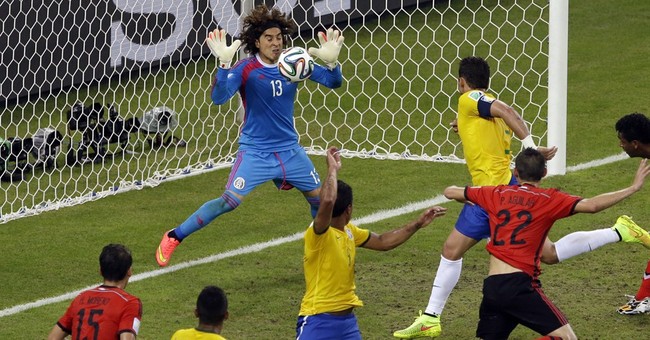 "Who the heck cares about a bunch of guys playing footsie with a little ball?"

"Ah, you speak of the World Cup. The fact is billions care. It's the most-watched sporting event in the world. And the Wall Street Journal reports that Americans are increasingly developing a taste for the sport, at least when their own team is playing."

"Perhaps if you knew more about football - what Americans refer to as soccer - you'd understand why so many countries are so passionate about it."

"You're going to lecture me, aren't you?"

"According to about.com, soccer has been played around the world for 3,000 years. Organized soccer dates to England in 1863, when various teams formed an association and began to standardize the rules of the game."

"Each game is referred to as a 'match.' A match is comprised of two 45-minute halves. The field is called a 'pitch.' And cleats are referred to as 'boots.'"

"How do the players insult each other? 'Your mother wears army cleats?'"

"Each football team has 11 players, with 10 on the field and one protecting the goal. Players may use any part of their bodies but their hands and arms. The object is to kick the ball into the other team's goal. The team with the most goals wins."

"No kidding? I thought the team that put the most people to sleep was the winner."

"As a result of the beauty and simplicity of the game - all you need is a ball and a makeshift field and you can play anywhere - the sport's popularity spread all over the world."

"In 1930, to celebrate its world-wide reach, the World Cup was born. It's an international competition that takes place every four years. During the three years leading up to the event, teams compete to qualify for 32 World Cup spots."

"OK, you educated me. But I'd still rather watch third-graders playing badminton."

"Perhaps you're uninterested in this sport because you're angry about America's poor performance in prior World Cups?"

"They got beat pretty bad in the past, but I hear they have shown some promise this year."

"I know there are other reasons the sport hasn't caught on in America. With football, baseball, basketball and hockey, there's simply no room to fit in another sport."

"You left out the female roller derby, an American classic."

"Michael Mandelbaum, author of 'The Meaning of Sports,' says a key reason Americans do not embrace soccer is because it is so similar to basketball. Both are simple games that seek to put a ball into a goal. He says it's not possible for both to prosper in the same place."

"At least there's lots of scoring in basketball. And you don't have to walk as far to get a beer."

"You raise an interesting point. Mandelbaum says Americans are very results-oriented. We like lots of activity and scoring. There is very little scoring throughout the World Cup event."

"Yeah, and what's with the falling down and writhing in pain every two minutes? I'd rather spend five seconds watching an NFL running back pound through a bunch of beefy guys to score six points than spend 90 minutes watching a bunch of skinny, crafty guys moan every time somebody touches them."

"As an American, then, you prefer force and power and lots of action and results?"

"Now you're talking. In fact, if the World Cup people wanted more Americans to tune in, they ought to turn their cameras away from the field and point them on the stands."

"Yeah, watching a bunch of guys trying to brawl after sucking down a dozen Heinekens is more entertaining that what is happening on the field. Americans would pay good money to see that."