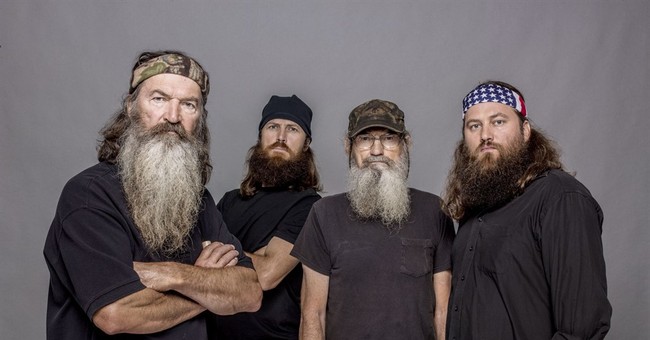 "Duck Dynasty," as you surely are aware, is an A&E reality show that presents the Robertson clan, the long-bearded owners and operators of Duck Commander in West Monroe, La. Duck Commander hand-makes duck calls.

The story is a rags-to-riches one.

Phil Robertson, the patriarch of the family, started his duck-call business some 25 years ago. The avid outdoorsman was dissatisfied with the duck calls that were then available, so he made his own.

He did about $8,000 in revenue his first year, but slowly built up the business over the next few decades, hiring a lot of relatives along the way.

His son, Willie, took over the company and has grown it to a $45 million annual business - one that has made the Robertson family mighty wealthy. They were wealthy before "Duck Dynasty" became a hit cable show that draws record-breaking numbers of viewers.

Many media critics have been speculating as to why the show is so popular - and some, such as Rolling Stone, say the show and the characters are nothing but a big con. As usual, so many in the media are getting it exactly wrong.

It's true that each episode is scripted and staged with fairly typical sitcom plots. But what is also true is that the Robertsons are totally authentic characters.

There are Phil and Kay's three bearded sons, who all work at Duck Commander, their wives and kids and, of course, Uncle Si, a gray-bearded Army veteran who is daggone colorful and funny.

These people are unapologetically religious. They believe that when you marry, you really do become one flesh. Their families are intact and functional, and the show celebrates these simple values.

The characters are politically incorrect and unapologetic about that, too. They happily go into the woods to shoot, skin and cook their dinner.

Unlike most sitcoms on TV these days, the fathers are not dribbling idiots. They are respected by their kids. And grandfather Phil is respected by his grandkids.

The characters are all self-deprecating and don't mind being the butt of the joke - because it is clear they are all in on the joke and having a grand time creating the show.

It is orderliness that draws us in - the orderliness that is missing in too many American homes that are broken up by divorce or headed by single parents. In the case of the Robertsons, order is made possible by their faith.

And nobody understands that better than Phil.

He explains in his autobiography that he was not a good man in his 20s. He quit teaching - he has a master's degree in education - and ran a bar. He frequently got drunk and into trouble and was not very nice to his wife and young kids.

But he eventually found his way to church and his Christian faith transformed him. He became a changed man and has since tried to live his life according to the Bible.

Media critics compare "Duck Dynasty" to typical sitcoms, but if there is any one show it should be compared to, it is "The Waltons," another fine show about a functional, intact family.

Much like "The Waltons," most "Duck Dynasty" episodes show the entire Robertson clan sitting around the dinner table and saying grace before they break bread together.

It is their togetherness that draws in viewers. We like the way they celebrate simple, traditional values with humor and self-deprecation. We like the way orderliness guides their lives and brings order to their families.

You have to be a cynic to miss the obvious reason so many viewers are tuning in. And most big-city media critics are too cynical to understand what "Duck Dynasty" is really about.