Tom Grace
|
Posted: Oct 09, 2017 12:01 AM
Share   Tweet
The opinions expressed by columnists are their own and do not necessarily represent the views of Townhall.com. 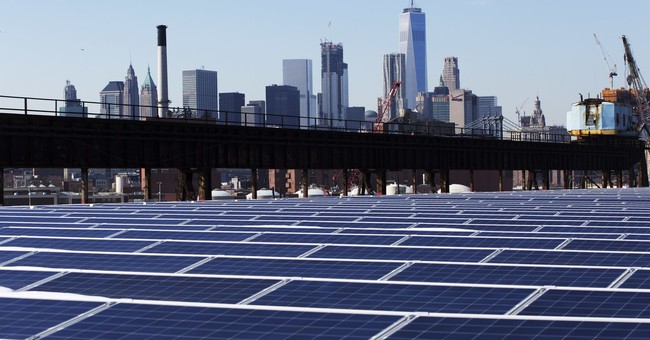 Undeniable is available for purchase on Amazon.

The graffiti was crude and unimaginative. The words were scrawled across a ten-foot section of the corridor wall in tall letters the color of blood. Drips ran down from the thick spots where the vandal activist started and stopped his strokes. The scent of aerosolized acrylic lingered in the air.

Security guard Burt Dobbin pressed a finger to one of the spots— the paint felt tacky. He wiped the residue on the wall and pressed the send button on the microphone clipped to the epaulet of his uniform.

“Yeah,” a voice crackled back.

“I’m on six, main corridor near the conference room. Some nut job musta got in and spray painted a nastygram on the wall.”

Dobbin could hear Charlie Sparks breathing over the walkie-talkie. “Perimeter looks clear. Same with the stairwells.”

“I take it this death threat wasn’t here during your rounds an hour ago.”

“Well, call it into Central, double-check the doors, and get up here. We need to do a room-by-room sweep.”

Ten minutes later, Dobbin’s partner on the night shift scaled the stairs to the top floor of the six-story commercial loft in the heart of Manhattan’s Tribeca District. The nineteenth-century warehouse building had fallen on hard times and then found new life with a renovation that transformed it into the national headquarters of Heartland Family Planning.

As he closed the stair door behind him, Sparks swiped a card key through the jamb reader to set the door into alarm mode. The illuminated display changed from green to red. He then joined his partner by the defaced wall.

“Damn,” Sparks hissed through his teeth.

“Main floor perimeter is locked down. The elevators are parked on one, and if they pop a stair door without a card key, we’ll hear about it.”

“Good. Let’s start with the conference room and work our way around.”

Sparks nodded. The pair drew their side arms and moved into position on the strike side of the door to the floor’s large conference room. Sparks swiped his card key to unlock the door. On Dobbin’s signal, Sparks grabbed the lever handle and opened the door. Sensors inside the room detected the sudden motion and the lights suspended over the conference table flickered on.

They entered and visually swept the room, their eyes tracking in concert with the barrels of their Sig Sauer P250s. Both signaled a thumbs-up, confirming that the room was clear. Sparks locked the door as they exited, and the pair moved on to the next room.

The sixth floor housed the administrative offices of Heartland Family Planning, a nationwide network of clinics and counseling facilities offering a full range of women’s reproductive health services. No patients or clients visited the Tribeca facility. This building contained only the back-office legal and administrative functions associated with the specialty healthcare provider.

The guards searched counterclockwise around the floor, checking the offices belonging to Heartland’s senior staff and finding nothing amiss. Halfway through their circuit, Dobbin led the way through the open office area that served as the antechamber to the chief executive officer’s inner sanctum. Finding no one hiding under the desks, the security guards proceeded to an imposing wood door.

Sparks again cleared the electronic lock, opened the door, and followed Dobbin in. As the senior man, Dobbin believed in leading by example, especially with a new guard like Sparks, who had only spent a few weeks on the job. He took two steps into the room, then felt his partner move into position behind him.

The city glistened through the arched windows of the large office. And as the lights came on, Dobbin saw a can of spray paint on top of the CEO’s glass and steel desk. He took a step toward the desk, quietly thankful for its open frame construction that offered no place of concealment. The office smelled of fresh acrylic, and a single word clung wetly to the glass desktop: MURDERER.

“Our perp must still be in the suite,” Dobbin said, just above a whisper.

Then everything went black for Dobbin.

Sparks watched his partner collapse onto the carpeted floor, the unconscious man’s awkward descent ended with a muffled thud and the clatter of his dislodged sidearm. A satisfied smile curled in the corners of his mouth—his time playing the role of Charlie Sparks was over, and Byron Palmer’s real work could now begin.

The device in his hand bore a passing resemblance to a Taser, though its technological innards were considerably more sophisticated.

A fan of Star Trek from his youth, Palmer called his invention a disrupter, because it did exactly that to the low-voltage current that powers the human body. It was much like flipping a switch and, depending on the intensity, the effect could be temporary or permanent.

Palmer left his former partner where he fell and sat behind the CEO’s desk. During his rounds over the previous weeks, he had loaded select computers with keystroke traps, collecting legitimate usernames and passwords. Bit by bit, he fashioned a temporary identity with unfettered access to the wealth of information stored in Heartland’s data center. He slipped a flash drive into the USB port, and the programs it contained came to life. A window opened on the CEO’s flat screen monitor, displaying the status of Palmer’s data mining effort. Satisfied that all was performing as planned, he left the office whistling the dwarf’s work song from Disney’s Snow White.

In addition to scouring Heartland’s electronic archives, the programs Palmer unleashed tapped the building’s security network, bypassing live camera feeds with prerecorded imagery. He made his way through the building to the loading dock. Just outside the service door, he found the pair of homeless men he had befriended over the past few weeks.

“Look, it’s Charlie,” one said warmly, his face expectant like a dog’s upon the return of his master.

Both men staggered to their feet, hopeful for another few dollars to carry them through the coming day.

“Hey fellas, real cold out tonight. Wanna step inside and warm up a bit?”

“C-can we?” one asked, surprised by the offer.

“Sure. I’ll kick on the dock heaters.”

Palmer led the two men through the open door. Once inside, he quickly stunned both with the disrupter. He then stripped the men and dressed the one closest to his height and build in an identical guard uniform. The other wino he clad in activist chic—used jeans, a hooded sweatshirt, and a careworn army field jacket. Palmer stuffed the threadbare, grimy rags he had peeled from the men into a large black trash bag that he set beside the loading dock door. He loaded the two men on a dolly along with a pair of backpacks and checked his watch—right on schedule.

Once on the sixth floor, Palmer set the stage. He laid the fake guard on the floor outside the CEO’s office door, where Palmer had stood when he incapacitated Dobbin. He dragged the faux activist into the office, setting him against a credenza between two of the arched windows, and placed both backpacks on top of the desk. From one, he removed a pair of jeans and other layers appropriate for this time of year in the city. He quickly changed clothes and stuffed his uniform into the empty backpack.

Palmer waited for the computer to chime, then he withdrew the flash drive, and tucked it into his pocket. He saw the fading remnants of the programs erase themselves and knew that all traces of their actions would disappear from the internal network. Satisfied, he reached into the second backpack and activated a timer. As it counted down, he slung the backpack containing his uniform over his shoulder and departed.

Down on the main floor, Palmer picked up the black trash bag and slipped out the back door into the alley. He followed a meandering course away from the building and dumped the trash bag in a pile of refuse awaiting the 5:00 a.m. garbage collection. He heard a low dull rumble as he neared the subway station, and then saw a bright flash as flames leaped skyward from the top floor of the Heartland building.