Dr. Robert Jeffress Warns Christians Not to Send Their Children to This University

Todd Starnes
|
Posted: May 19, 2021 8:57 AM
Share   Tweet
The opinions expressed by columnists are their own and do not necessarily represent the views of Townhall.com. 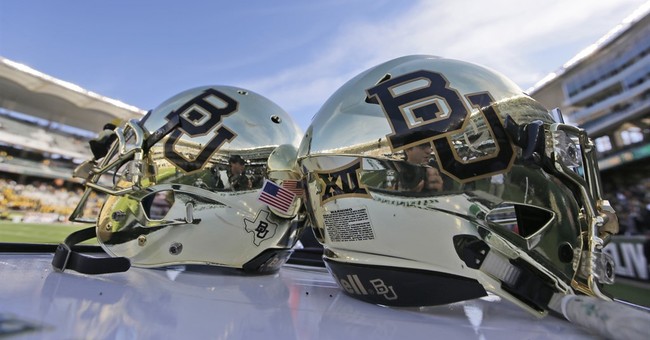 One of the most prominent Southern Baptist pastors in the nation is warning Christian parents to keep their kids away from Baylor University.

"What they teach and the underlying philosophy is anti-Christian," Pastor Robert Jeffress said on the Todd Starnes Radio Show. "And I don't think any true Christian parent who wants their kids to have a Christian education would allow their child anywhere near Baylor University."

Jeffress, the pastor of First Baptist Church in Dallas, Texas, and a Baylor alumnus, was set off by the university's recent actions on LGBT-related issues.

The board of regents adopted a resolution that many say will lead the way to the creation of a university-sanctioned LGBT organization.

More than 30 nearby pastors wrote letters to Baylor pleading with leadership to remain faithful to the Bible’s teachings on marriage and sexuality.

Baylor said they still support "purity in singleness and fidelity in marriage between a man and a woman as the biblical norm."

But Dr. Jeffress is warning Christians not to buy what the university is selling.

"Like any good magician, the Baylor administration has mastered the art of distraction and deception," Jeffress told me.

The board of regents directed the university's president to determine the appropriate pathways to provide additional care, connections, and community for Baylor’s LGBTQ students, including the possibility of establishing a new, chartered student group that is consistent with Baylor’s core commitments summarized above and the University’s policies and statements."

"What this really is Todd - is a fraternity for LGBTQ students. The fact is they thought a support group might give the impression that they were trying to help these students. If they were really trying to leave these students out of homosexuality and out of gender confusion, that would be a good thing. But what they're really going to do is to affirm their right to engage in that kind of ungodly behavior," Jeffress said.

Jeffress said the Christianity professed by Baylor University is nothing more than a facade. He said there are professors on the campus who are actively trying to convince the young to question their faith in God.

"Our church has sent students down there for years who have their faith completely torn apart by infidels in the religion department," he said.

Jeffress said it's important for parents and students to investigation Christian universities that are Christian in name only.

Yes, folks. Pastor Jeffress believes you would be better sending your child to a secular university than Baylor University.

"At least your child will understand the battle lines and what they are instead of being confused by people who claim to be a Christian but act in a completely different way," he added.