Todd Starnes
|
Posted: Feb 12, 2018 8:27 AM
Share   Tweet
The opinions expressed by columnists are their own and do not necessarily represent the views of Townhall.com. 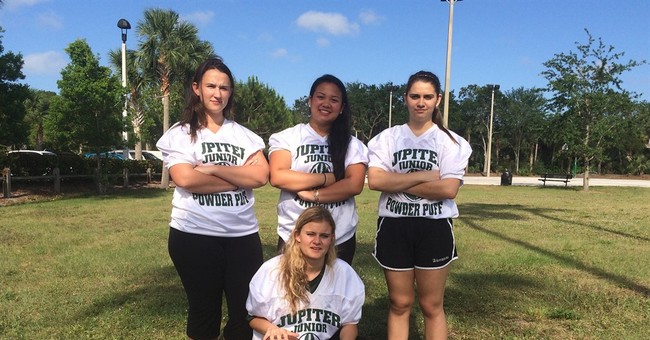 Powderpuff football games are a longstanding tradition in many high schools across the fruited plain. It’s a gender-swap of sorts – the girls wear helmets and jerseys and the guys dress up like cheerleaders.

Students at Chaffey High School in Ontario, California, made the powderpuff football game a part of their annual “Backwards Day” celebration. It’s a tradition that dates back decades.

But now Chaffey’s fun-filled tradition is at the center of a bizarre controversy. Click here to watch the video.

The Chaffey Joint Union High School District banned the boys pep squad from dressing up as cheerleaders --- over fears that it might give the impression the boys were mocking cross-dressers.

"Some felt the activity was hurtful and offensive to some students," Supt. Mat Holton told the Inland Valley Daily Bulletin. “There was some who felt this made more of a mockery of those who cross-dress."

Girls will still be permitted to wear jerseys and helmets, but the boys will not be allowed to wear short skirts.

“I think our principal is doing this because it’s to protect certain students,” parent Patricia Luna told television station KABC.

The school district said their decision to ban boys from dressing like cheerleaders is a “thoughtful compromise in response to the sensitivities that have been raised by a number of students and staff.”

“While this activity has been a campus tradition, we understand, too, that there are sensitivities on all sides of the issue,” the district said in a prepared statement.

In other words, folks who promote tolerance and diversity were triggered by a bunch of boys dressing up like cheerleaders.

As you might imagine, students, parents and alumni are befuddled by the school district’s decision.

“I think it is silly,” parent Diane Ramirez told KABC. “They did that when I was in high school and it’s all in just good fun. It’s not trying to be offensive to anybody, it’s just having fun.”

But as we know all too well – liberals have taken all the fun out of extracurricular activities.

“I think it's a major disappointment for the whole school. It's been a tradition for so long," said another student.

But the school district seems to believe that some things are more important than tradition.

“We will always be sensitive to the feelings of our students,” the superintendent told the newspaper.

So another beloved high school tradition goes down in flames for the sake of protecting the perpetually offended. Political correctness is nothing to shake your pom-poms at, America.