Todd Starnes
|
Posted: Feb 01, 2017 5:26 PM
Share   Tweet
The opinions expressed by columnists are their own and do not necessarily represent the views of Townhall.com. 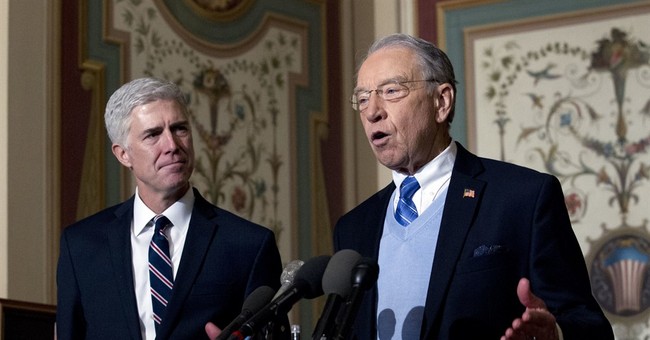 It's only a matter of time before Democrats accuse President Trump’s Supreme Court nominee of hating puppies.

House Minority Leader Nancy Pelosi launched a rather ugly attack on Judge Neil Gorsuch just moments after he was announced as Trump’s nominee – calling him a “very hostile appointment” and “well outside the mainstream of American legal thought.”

Click here for a free subscription to Todd’s newsletter – a must-read for Conservatives.

“If you breathe air, drink water, eat food, take medicine or in any other way, interact with the courts, this is a very bad decision,” Pelosi said during a CNN town hall gathering.

In other words, liberals believe Judge Gorsuch wants to starve our kids and poison our drinking water – but otherwise he’s a nice guy.

Congresswoman Pelosi stopped just short of calling him the spawn of Satan.

For the record - Judge Gorsuch does not hate children or puppies. He is a good and decent man. A faithful husband, devoted father.

He enjoys fly fishing and skiing and once worked as an overnight desk clerk at Howard Johnson’s. He raises horses and goats and chickens on his Colorado farm.

And based on a brief examination of his family lineage, I believe it’s safe to say Judge Gorsuch is not an offspring of the Prince of Darkness.

There's going to be a lot of mud-slinging, folks. Liberals are genuinely repulsed by any judicial appointee who values life and liberty.

And the fact that Judge Gorsuch once defended cross-shaped memorials for fallen state troopers is sure to cause a conniption among the atheist, agnostic and free-thinker crowd.

President Trump should be commended for nominating a judge in the mold of Justice Antonin Scalia – a judge who will no doubt defend religious liberty.

“Promise made. Promise kept,” said Jerry A. Johnson, president of National Religious Broadcasters. “President Trump boldly told the American people the list of potential justices from which he would make his choice, and he kept that promise by nominating Judge Gorsuch.”

Almighty and Most Merciful God, we beseech thee. Protect Judge Gorsuch from the liberal hate mob that is about to descendeth upon thy servant like a pack of rabid jackals. May they feast not upon thy servant’s judicial carcass. Give our Brother the intestinal fortitude to resist the urge to whacketh the wicked as they are about to whacketh him.