Todd Starnes
|
Posted: Jan 10, 2017 10:56 AM
Share   Tweet
The opinions expressed by columnists are their own and do not necessarily represent the views of Townhall.com. 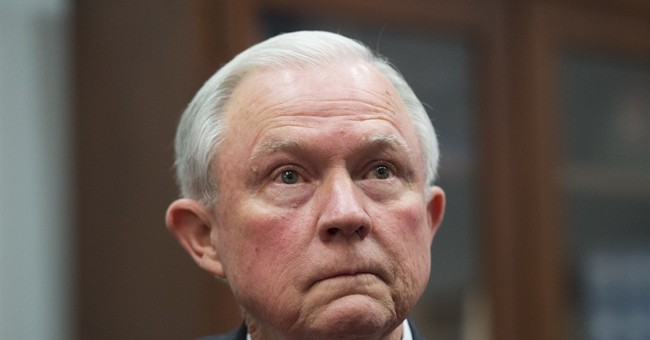 President-elect Donald Trump’s pick for attorney general is facing nothing short of a racially-motivated, political lynch mob on Capitol Hill.

Prior to his confirmation hearing, two men dressed in Ku Klux Klan robes shouting in Southern accents were removed from the hearing room.

The incident set the stage for what will no doubt be an ugly attempt by Democrats to assassinate the character of the gentleman from Alabama.

Some Democrats are calling him by his given name, Jefferson Beauregard Sessions – a wink-wink, nod-nod to the Civil War – as if he’s a slave-holding plantation owner.

Remember how indignant Democrats were when Republicans referred to our current president by his full name, Barack Hussein Obama? But these days, the Left’s indignation is rather selective.

The New York Post correctly predicted the Left and the Mainstream Media were “tarring the Alabama senator as a racist.”

“The immense powers of the attorney general combined with the deeply troubled views of this nominee is a call to conscience,” Booker wrote in a statement published by Politico.

The Congressional Black Caucus is leading the charge to destroy Sessions.

Rep. Andrew Carson (D-IN) told Think Progress that Sessions “stands by and makes disparaging remarks against people of color who raise their voices in protest.”

Rep. Maxine Waters (D-CA) accused the senator of having a “long legacy of insensitive, racially-charged comments against minorities.”

The NAACP went so far as to tweet that Sessions “supports an old, ugly history” when it comes to civil rights, the newspaper reported.

They went on to accuse the distinguished senator of having a troubled history of racial discrimination.

The NAACP and CBC smeared Sessions’ character without offering a shred of documented evidence that he’s a racist. But there is plenty of evidence to support the claims that he’s a defender of civil rights.

During his tenure as a U.S. attorney, he desegregated schools.

He also prosecuted the head of the Alabama Ku Klux Klan for murder. The Post reports that prosecution led to a multi-million dollar judgement that broke the back of the Klan.

But those facts do not fit the NAACP’s or the CBC’s hateful narrative.

Senator Sessions is a good and decent man – an Eagle Scout. He is a husband, a father and a grandfather. He’s a faithful member of the Methodist Church and a former Sunday school teacher.

And he deserves better than to be bullied just because he's a white Southern man named Jefferson Beauregard.

Judge a man by the content of his character - that's what Martin Luther King said.

The Congressional Black Caucus and the NAACP should heed Dr. King’s words.