Todd Starnes
|
Posted: Nov 03, 2016 4:15 PM
Share   Tweet
The opinions expressed by columnists are their own and do not necessarily represent the views of Townhall.com. 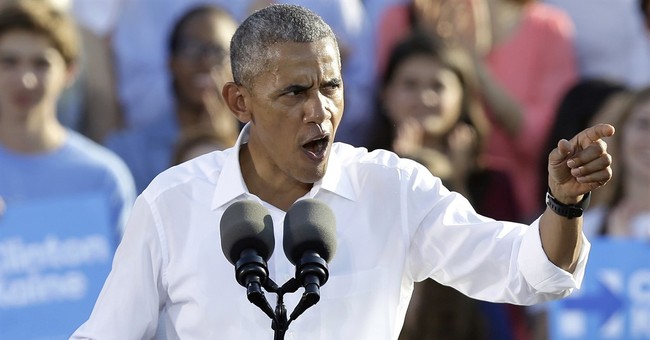 President Obama was in North Carolina the other day. he was dropping his "g's" and throwing around Southern slang like he was a slinging hash browns down at the Waffle House.

He started off by talking about how much he "loves me some North Carolina."

The president tossed out the word "holler" and then said it was time to get down to "bidness." Not business, but "bidness."

The White House seems to think all of us Southerners walk around talking like Boss Hogg from the Dukes of Hazzard.

READ THE FULL STORY AT TODDSTARNES.COM!
Progressives Are For Sure to Have a Meltdown Over Biden's Immigration Changes Next Month
Matt Vespa
Psaki Doubles Down on Democrats Wanting the IRS to Spy on Bank Accounts
Katie Pavlich
Whistleblower Says ICE Released Over 16,000 COVID-Positive Immigrants Into the US
Julio Rosas
The Price of Democracy: On the Murder of British MP David Amess and His Recent Townhall Column