Todd Starnes
|
Posted: Oct 10, 2016 9:24 AM
Share   Tweet
The opinions expressed by columnists are their own and do not necessarily represent the views of Townhall.com. 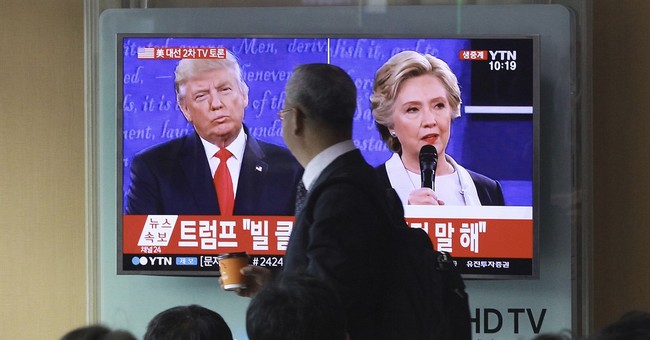 1. Trump was loaded for bear. We have a saying down in Dixie: Donald Trump shucked it to the cob. His campaign was teetering on the brink. Republicans have abandoned him in droves. And yet, he came out and delivered a solid performance.

2. Voters were more interested in Hillary’s emails, not Trump’s locker room talk. Frank Luntz says his focus group gave Trump the win. As for the emails, he tweeted, “Trump’s tape is bad for him, but Hillary’s emails are even worse for her.” Luntz went on to say Trump is back in the race.

3. This wasn’t a town hall debate. It was a town hall ambush. CNN’s Anderson Cooper and ABC’s Martha Raddatz, disgraced themselves and their networks by ganging up on Donald Trump. When the audience cheered for Trump, they were told to be quiet. But when they cheered for Hillary, the moderators were silent. “One on three” is how Trump described it.

4. Hillary got rattled. Donald Trump knocked Hillary off her talking points and she was clearly rattled by his political punches. Off stage, one of her campaign staffers tweeted a profane message to Trump, “F*** you.” Not a bad job for a candidate who was also fielding attacks from Clinton spokesman Anderson Cooper and Clinton’s designated debater, Martha Raddatz.