The Dukes of Hazzard Just Got Culturally Cleansed 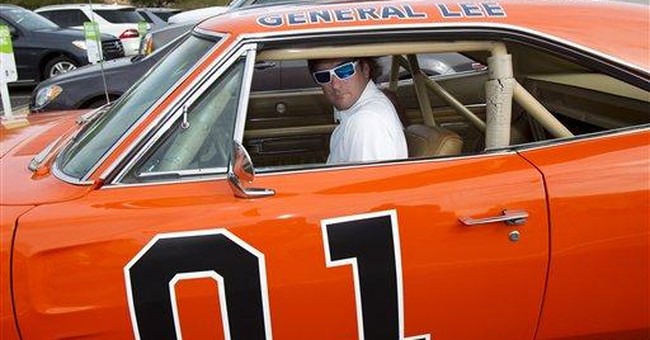 A full-fledged cultural cleansing of the Southern States is under way - and the latest victim is the General Lee.

Warner Brothers announced they will remove the Confederate Flag from atop one of the most famous cars in television history. They will also ban any Dukes of Hazzard merchandise that once sported the Confederate flag.

Maybe they could just paint a rainbow flag on top and rename it the General Sherman. He culturally cleansed the South, too. Just ask the good people of Atlanta.

Sears, Wal-Mart and E-Bay have also announced they will no longer sell Confederate merchandise.

Meanwhile lawmakers are debating whether to remove state flags and rename schools and parks and streets named after Confederate war heroes. In Washington they're talking about removing Confederate statues from the U.S. Capitol. Senator Mitch McConnell wants a statue of Jefferson Davis evicted from the Kentucky statehouse. And Senator Harry Reid wants UNLV to rename its Runnin Rebels mascot.

Get ready, Ole Miss -- they'll be coming after you folks next.

It's only a matter of time before the cultural revolutionaries destroy films like Gone with the Wind and Forrest Gump and burn copies of Tom Sawyer and Huckleberry Finn.

Stalin and Lenin would be bursting with pride.

You know who else has been doing some cultural cleansing?

The Islamic State -- bulldozing their way through history -- turning Iraq's heritage into rubble.

And mark my words - the left's cultural crusade will not stop with the Confederate Flag. They will use the perception of racism and hatred to whitewash history and silence dissent.

And one day - very soon - I predict they will come after another flag -- the one with broad stripes and bright stars. So don't be terribly surprised when even Republicans stand idly by as they burn the Star-Spangled Banner.