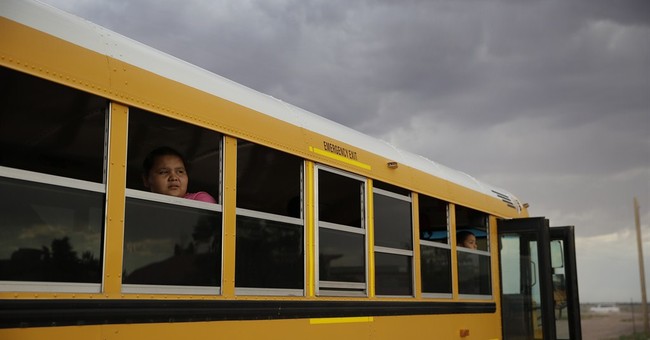 Adam Stinnett looks up to his older stepbrother – a soldier in the U.S. Army. So when it came time to get a haircut, the seven-year-old told his mother he wanted a basic military-style cut. And that’s exactly what he got – high and tight – just like his stepbrother.

Adam got his haircut on March 8. On March 9, his mother got a letter from the principal of Bobby Ray Memorial Elementary School in McMinnville, Tennessee.

It seems they were not all that thrilled with the second grader’s new hairdo. The principal told Amy Stinnett that her son’s haircut was distracting – and needed to be fixed.

The following day, she was summoned to the principal’s office where she was given an ultimatum.

“We were told that we had to either cut his hair or he could not return to school,” she said.

Amy tried to explain to the principal that her son’s haircut was meant to emulate his older brother. But her explanation was dismissed and the principal demanded that the boy’s hair be “in compliance with our rules.”

“I have the utmost respect for the military and its members,” the principal wrote in an email to Amy. “However, we are not a military school and the boy’s haircut is against our rules.”

She tried to reason with the principal – but it was a lost cause. So Amy complied with the school’s demands.

“In order to fix the high and tight, I had to shave his head – like he has no hair,” she told me.

Apparently the principal at Bobby Ray Elementary School doesn’t seem to think a bald-headed second grader is going to cause a distraction.

But Amy also did something else – she contacted the Southern Standard newspaper. And as it turned out – the pen really is mightier than the clippers.

“Military hair cut deemed distracting by Bobby Ray Elementary” was the headline – and boy did it create some controversy around McMinnville.

“They shamed my son and they shamed a lot of military people – that’s how I feel about it,” Amy said. She also would like the school to apologize to her son.

The Warren County School District responded to the newspaper story with a four-paragraph statement telling folks they could not comment on the incident or the investigation – on the advice of their attorneys.

“This is an internal school matter and the administration of the school district has been advised to address it as such from this point forward,” the statement read.

While the district does not have a policy about hair styles, individual schools are given authority to make such decisions.

Well, someone at the district office might want to clue in the principal -- because according to her email – military style haircuts are clearly against the rules.

It’s a pretty sad state of affairs in McMinnville – especially when you take into account that Bobby Ray Memorial Elementary School is named after a local war hero.

Navy Corpsman David Robert “Bobby” Ray was killed in action during the Vietnam War. His final act of heroism was to use his body to shield a Marine from a grenade. The Marine survived. Ray did not. He was posthumously awarded the Medal of Honor.

“We are extremely proud that Bobby Ray Memorial Elementary was named in honor of a true American hero,” the school district stated.

And yet, they chose to shame a seven-year-old boy who wanted to look like a soldier. That school district doesn’t know the first thing about honor.