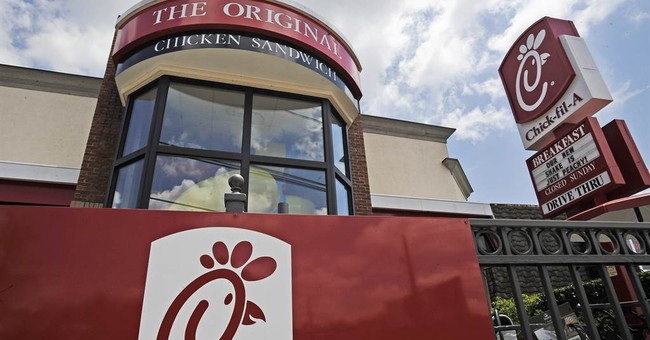 Feathers have been ruffled at California’s Ventura High School, where the principal this week banned the football booster club from selling Chick-fil-A sandwiches over fears that people might be offended.

Were English teachers put off by the restaurant chain’s grammatically challenged bovine pitchmen?

Did the waffle fries and banana pudding milkshakes exceed the nutritional limits deemed acceptable by the federal government?

The answer, dear readers, is no. It seems Principal Val Wyatt’s ban has less to do with poultry and more to do with politics.

“With their political stance on gay rights and because the students of Ventura High School and their parents would be at the event, I didn’t want them on campus,” Wyatt told the Ventura County Star.

It was a sentiment supported by Trudy Tuttle Ariaga, superintendent of the Ventura Unified School District.

“We value inclusivity and diversity on our campus, and all our events and activities are going to adhere to our mission,” Ariaga told CBS News in Los Angeles.

This is a classic example of those preaching inclusivity and diversity being the least inclusive and diverse of all.

Let’s back up for a minute and explain how this unfortunate act of poultry bigotry came about.

The local Chick-fil-A franchise has a storied history of supporting the school district – to the tune of thousands of dollars – and owner Robert Shaffer had generously offered to give the booster club 200 meals for a “back-to-school” event on Wednesday at which they expected to raise $1,600 for the football team, the Ventura Star reported.

“That would have gone toward the football program, everything from uniforms to food for the boys,” booster club president Dan Swim told the Star. “We don’t charge money for the boys to play football.”

A few days before the back-to-school event, the principal broke the news to the booster club. She said her “main reason” for banning Chick-fil-A was because she did not want an outside organization to sell or advertise during the event.

“I work really hard to keep Ventura High School from being a marketplace for all kinds of vendors to come to the campus and reap profit,” she told the newspaper.

Well, dear. That’s a bit disingenuous. Chick-fil-A was not making a single penny. They were giving all the proceeds to the booster club. Period.

I suspect her “main reason” had more to do with her statement about Chick-fil-A’s opposition to gay rights.

“Chick-fil-A doesn’t have a stance on gay marriage,” Shaffer told the Star. “We treat everyone who walks through our doors, regardless of their religion or sexual orientation, with honor, dignity and respect.”

In a 2012 interview that was published by Baptist Press, Chick-fil-A president Dan Cathy affirmed his support of the biblical definition of the family. The interview sparked nationwide outrage among the LGBT community and the mainstream media.

That’s it. That’s what Dan Cathy said. Here’s the link to the interview. Read it for yourself. Not once did Cathy say anything disparaging about the LGBT community or gay marriage.

Unless, of course, the principal is suggesting that people who support the biblical definition of marriage are somehow anti-gay. Is that what you are suggesting, Principal Wyatt?

At best, the principal is misinformed. At worst, she is an outright liar. But for the sake of generosity, let’s just say she’s slow on the uptake.

Principal Wyatt needs to retract her woefully ignorant statement and publicly apologize for her offensive accusations. And to show there are no hard feelings, I would be more than willing to allow her to make things right by posting her retraction in this column.

As they say at Chick-fil-A, it would be my pleasure, Principal Wyatt.

Paranoia or Reality? Ahead of Monday's Pro-Gun Rally in VA, State Senator Warns 'We are being set up'
Redstate
Warren: I'm the only one running with executive experience
Hotair