Troops Told to Refrain from Eating, Drinking in Front of Muslims 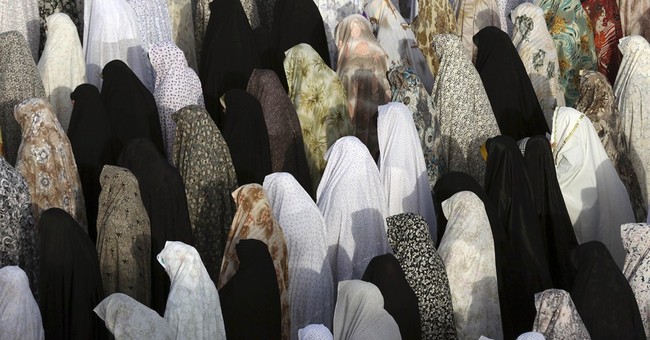 Do not eat or drink in front of Muslims, and learn more about their religion.

That’s the directive that has gone out to active duty military personnel at the Uniformed Services University of the Health Sciences, a Department of Defense medical and graduate school in Bethesda, Md.

The brigade commander sent an email to military personnel at the facility last month – just before the start of Ramadan – advising them to show respect to Muslim colleagues.

“This is a period of great personal restraint and commitment in addition to renewed focus on worship,” Brigade Commander Col. Kevin Glaszwrote. “I’d like to encourage you to learn just a little more about this religion, but more importantly, I’m asking you to be considerate and do not consume food or drink in front of our Muslim colleagues; it is a simple, yet respectful action.”

During the month-long period known as Ramadan, Muslims refrain from eating or drinking during daylight hours.

The brigade commander also provided a link to a website about Islam, and specifically Ramadan.

Now that raised the ire of some of the officers and doctors training at the USU, and several of them reached out to me with their concerns – provided I not disclose their names.

The entire incident smells of political correctness, the Marine told me.

“Our veterans have sacrificed too much blood, sweat and tears to have their own rights and freedoms be sacrificed on the altar of progressive political correctness,” the Marine said.

I contacted USU about the email. I wanted to understand the brigade commander’s intent. I gave them 20 days to respond, but no one returned my calls or emails.

Another individual who studies at USU was concerned about the wording of the email.

“It could be construed as an order and one that violates the First Amendment freedom of everyone who received it,” my source said. “This is an appalling violation, especially coming on the heels of so many instances where those of conservative Christian faith in the military are vilified.”

Meanwhile, Navy officials have ordered personnel serving in Bahrain to dress more conservatively off base, according to a report in Stars and Stripes. Men were ordered to wear long-sleeved shirts and women were told to wear blouses that cover their elbows and skirts or pants that cover the knees.

Stars and Stripes reported that base cultural advisers had spent several weeks conducting Ramadan briefings to “educate Americans about the holy month.” Personnel were given briefings on Islam, the lunar calendar and Ramadan customs.

The military’s quest to be culturally sensitive to celebrants of the Islamic faith stands in stark contrast to its recent crackdown on public expressions of the Christian faith.

Last Christmas, soldiers at Camp Shelby in Mississippi were told during a diversity briefing that they could not use the word “Christmas.” A VA hospital in Texas refused to accept holiday cards from boys and girls because the cards mentioned “Christmas” or “God bless you.” And a Nativity scene near a lake on Shaw Air Force Base in South Carolina was removed after someone complained.

So you might understand why Ron Crews, executive director of the Chaplain Alliance for Religious Liberty, is a bit surprised by the Pentagon’s recent behavior.

“There is a good biblical word for this: hypocrisy,” Crews told me.

“Our troops are being told to respect the Muslim Ramadan and encouraged to say ‘Ramadan Kareem,’ while at the same time they cannot have a cross on chapels, display a manger scene or say ‘Merry Christmas’ for fear of offending,” Crews said. “There is something wrong with this picture.”

He has a good point.

Crews said he completely understands the need for cultural advisers to inform military personnel about Islam. He said similar briefings were held prior to Desert Shield and Desert Storm.

“We wanted our folks to know about customs and culture so as not to offend unnecessarily,” he told me. “Of course we want to respect the faith of others, but should we be encouraging our folks to participate in the Muslim faith in this way?”

Why not just treat all religions fairly?

“I think that if there were emails about other faith traditions, this email wouldn’t have been so offensive,” my source at USU said. “Islam appears to have a protected status while Christians are increasingly vilified.”

Religious liberty. Now there’s an interesting concept – one enshrined in the U.S. Constitution.