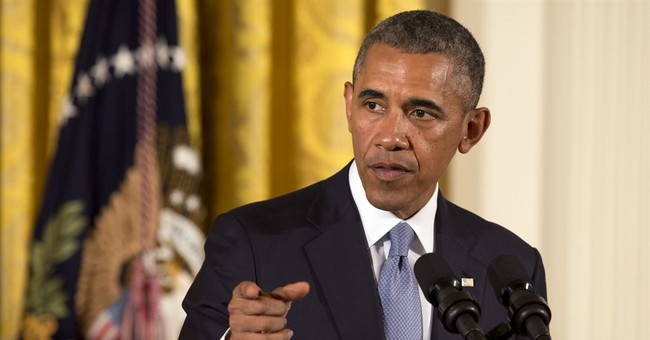 President Obama signed an executive order Monday barring federal contractors from discriminating on the basis of sexual orientation and gender identity – ignoring the pleas of Christian and other faith leaders to include an exemption for religious organizations.

“Thanks to your passion and advocacy and the irrefutable rightness of your cause, our government – the government of the people, by the people and for the people – will become just a little bit fairer,” the president told a gathering in the White House.

The executive order would prevent Christian and other religious organizations with federal contracts from requiring workers to adhere to the tenets of their religious beliefs. And that includes religious Christian colleges and universities that provide financial aid to students.

“If religious organizations cannot require that their employees conduct themselves in ways consistent with the teachings of their faith – then, essentially, those organizations are unable to operate in accordance with their faith,” Peter Sprigg, Senior Fellow for Policy Studies at the Family Research Council, told me.

He said the president’s order forces employers to put aside their principles in the name of political correctness. “This level of coercion is nothing less than viewpoint blackmail that bullies into silence every contractor and subcontractor who has moral objections to homosexual behavior,” Sprigg said.

A group of prominent religious leaders, including Rick Warren, founder and senior pastor at Saddleback Church, wrote a letter to President Obama urging him to include a religious exemption.

Not surprising, the president’s executive order was warmly welcomed by left-wing organizations like Americans United for Separation of Church and State.

“Religious groups have no right to accept taxpayer money and engage in rank forms of discrimination,” said executive director Barry Lynn. “Faith-based groups that tap the public purse should play by the same rules as everyone else and not expect special treatment.”

But that’s really not the point. This is about the federal government bullying religious groups that hold viewpoints it deems inappropriate.

As I wrote in my new book, “God Less America,” this administration believes gay rights trump everyone else’s rights – including religious rights.

Vice President Joe Biden went so far as to declare as much during a speech to international gay rights activists.

That explains why a Christian baker in Colorado was ordered by a state commission to undergo re-education training after he declined to participate in a gay wedding celebration.

That explains why a Christian photographer in New Mexico was found guilty of discrimination for refusing to photograph a gay wedding ceremony.

That explains why Democratic lawmakers in multiple states tried to shut down Chick-fil-A because of the owner’s privately held beliefs about traditional marriage.

And I as detail in “God Less America,” that explains why Billy Graham – “America’s pastor” – was subjected to an Internal Revenue Service audit after he supported a traditional marriage amendment in North Carolina.

The Obama administration and its militant cronies want to tell Christians whom to hire, how to run their business and how to think.

And now the president has decreed that any religious group that holds viewpoints divergent from the LGBT agenda is not worthy of federal tax dollars.

Last month, National Security Adviser Susan Rice told a gathering at the White House Forum on Global LGBT Human Rights that it was their responsibility to sway theological thinking on the LGBT issue.

“For the faith community, how can we reinforce to religious groups that God loves all the children of his creation equally?” she asked the crowd.

“Change will come,” she went on to say. “It’s already coming.”

Indeed, it has. And it appears the president has decided to “reinforce” the government’s theology on Christians by using his pen and phone.

And woe be to any Christian American who refuses to comply.

Denny Burk, professor of biblical studies at Boyce College, the undergraduate arm of the Southern Baptist Theological Seminary in Louisville, Ky. addressed the issues at hand in an essay titled, “Are Christian Colleges Free to be Christian?”

“There are people who are willing to use whatever means necessary to force religious institutions to conform to the new sexual morality,” he wrote. “Any individual or institution that refuses to comply will have to face the consequences.”

So what is the next logical step in the government’s systematic effort to marginalize Christianity? Robert Jeffress, pastor of the First Baptist Church in Dallas, suggests to me that churches might want to play close attention to their tax-exempt status.

“The problem with this executive order is that it paves the way for the next one – which could withhold the tax-exempt status or broadcast licenses for religious organizations holding biblical beliefs with which the administration disagrees,” Jeffress told me.

The Obama administration seems hell-bent on forcing Christians to assimilate to the militant LGBT agenda. Resistance is futile.