Look Around You: Do You Still Think America Won the Cold War?

Timothy Daughtry
|
Posted: Apr 19, 2018 12:01 AM
Share   Tweet
The opinions expressed by columnists are their own and do not necessarily represent the views of Townhall.com. 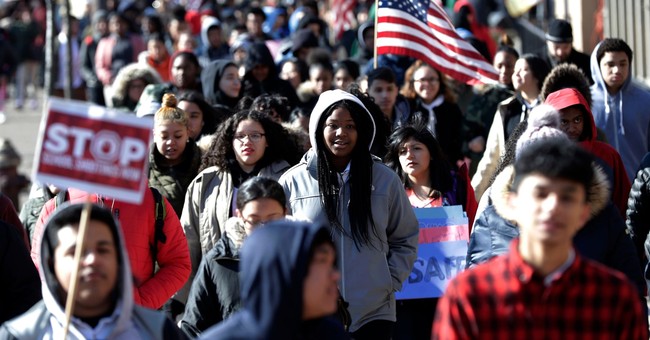 American teenagers march in the streets to gut or eliminate the Second Amendment, and our youth are increasingly comfortable with socialism.  Conservative speakers are harassed and physically threatened on college campuses.  According to many in positions of power, any difference in achievement or earning among various social groups is assumed to be evidence of discrimination or oppression of one group by another, and assumed to be grounds for governmental intervention.  Our national borders are being worn away despite popular demands for border security.  Much of what passes for news is filtered and packaged to support the leftist agenda.

Does it still look like we won the Cold War?

The Soviet Union might have died in 1991, but the intellectual and moral virus that killed it – The Marxist worldview – has spread to the United States and is wearing away our defenses against socialist tyranny.

It is not necessary to find hordes of card-carrying communists in order to recognize the threat of Marxism in American culture and politics.  Worldviews – including our views of government and political issues – are not so much the product of conscious deliberation as of cultural immersion, and so it is possible for people to learn to see society and politics through a Marxist lens without ever realizing it.

And the importance of cultural immersion was the great insight of the Cultural Marxists beginning in the 1920s.  Marxist intellectuals such as Antonio Gramsci realized that the deep values of Judeo-Christian culture stood in the way of enlisting people in violent revolution.  It was hard to enlist people in a violent struggle of class against class if their worldview saw people as morally responsible individuals and not as faceless members of an economic or demographic class.  National identity and patriotism stood in the way of uniting Karl Marx’s “workers of the world” to overthrow the capitalist system.  Belief in God and timeless principles of right and wrong stood in the way of the materialist worldview and its moral relativism.

And so Gramsci and other Marxist writers envisioned a “long march” through the cultural institutions of the West, beginning with the universities.  The primary tactic was Critical Theory, the relentless assault upon the intellectual and moral foundations of Western culture.  If Marxist ideas about economics, the family, religion, and society in general could gain dominance in the universities, those ideas would eventually follow graduates into other cultural institutions such as public education, the news media, and entertainment.

The Frankfurt School in Germany attracted numerous intellectuals to the cause of Cultural Marxism, and many of them fled to America’s universities as Hitler rose to power in the 1930s and ‘40s.  While America’s international policy was to confront and contain communism around the world, the intellectual and moral assumptions of the Marxist worldview were taking hold in many of our universities.

The left’s cultural strategy did not require conscious conversion to Marxism as a political theory.  Repeated exposure to the assumptions and implications of the Marxist worldview and the enforced absence of contradictory frames of reference were sufficient.

Most Americans have never heard of Marxist intellectuals such as Herbert Marcuse, but his 1965 treatise on Repressive Tolerance provided the justification for intolerance toward any views that stood in the way of the Marxist liberation agenda.   The impact of his thinking can be seen in campus speech codes and harassment of conservative speakers on today’s college campuses.  Disagreement with today’s left is simply defined as hate speech, and hate speech is simply not to be tolerated.  Argument – and minds – closed.

And consider how much of American political discourse is dominated by the idea of one class of people struggling against another class of people.  The classical Marxist idea of workers against capitalists has been transformed into black against white, women against men, homosexuals against heterosexuals, immigrants against native-born, and young against old.  The class-against-class struggle of classical Marxism still drives the left’s agenda; only the labels are different.

Ask people who have been immersed in the leftist worldview to talk about differences in academic or economic achievement among various groups without talking about oppression or discrimination, and they are helpless.  The widespread assumption is that differences are by definition evidence of “privilege” or oppression of one class by another.  They have no mental framework for talking about what Professor Thomas Sowell calls “cultural capital,” differences in the value placed on education, hard work, and self-discipline by various social groups and the individuals within those groups.

Leftists have learned that it is easier to attack people than to debate ideas.  Ask a leftist to explain how “white privilege” accounts for the superior academic performance of Asian students over white students in the United States, and you might be accused of being a fascist, but you won’t get a sensible answer.

The left is increasingly emboldened and militant.   Their attacks on the First and Second Amendments are no longer veiled and piecemeal, but are instead open and direct.   Leftist bureaucrats in the Deep State have weaponized their institutions against their opponents and are even attempting to overthrow the 2016 election.  And so far, they have gotten away with doing so.

The questions underlying America’s ideological civil war today are the same ones that fueled the Cold War.  Are humans prone to abuse power unless it is defined and checked, or is humanity progressing toward some “higher” state that makes limited government obsolete?  Is the purpose of government to protect liberty or to impose uniformity of thought and action?  Are national boundaries and sovereignty worth defending, or is the idea of nationhood a relic of the past?  Do people have worth as individuals or only as members of a class?  Are rights God-given or bestowed by government?

If America really won the Cold War, then why do so many Americans act as though the Soviets had the better answer to those questions?