Tim Graham
|
Posted: Mar 23, 2022 12:01 AM
Share   Tweet
The opinions expressed by columnists are their own and do not necessarily represent the views of Townhall.com. 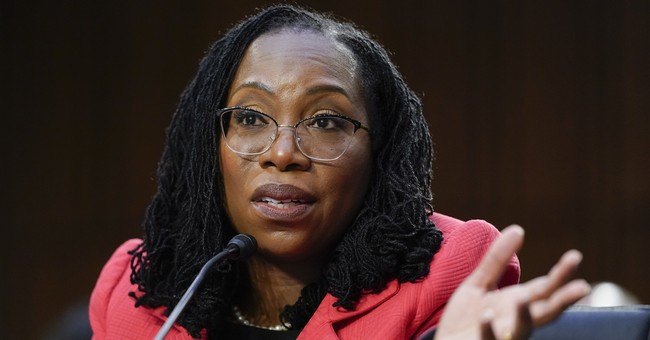 The liberal media has treated the Supreme Court nomination of Ketanji Brown Jackson as a glorious and historic occasion. Nobody needs to care about where she stands on things since she and the media share all the "correct opinions."

The Associated Press issued a story under this tweet: "For Black girls, the possibility of Ketanji Brown Jackson being the first Black woman on the Supreme Court is a moment of promise, hope and the breaking of yet another barrier."

But on July 1, 1991, when President George H.W. Bush nominated Clarence Thomas to the Supreme Court, the networks were horrified. He was a conservative, so he wasn't black. On ABC's "World News Tonight," reporter Tim O'Brien said that a "prominent black legal scholar called Thomas's nomination to the Supreme Court insulting." It was Harvard's Derrick Bell, the architect of critical race theory, who angrily claimed, "To place a person who looks black, and in conservative terms thinks white, is an insult."

On "NBC Nightly News," Jim Miklaszewski forwarded liberals who said, "Thomas tried to dismantle affirmative action," and then found Rep. John Lewis to say, "But simply because he's black doesn't make him right or make him good for the United States Supreme Court."

The NBC reporter concluded, "With opposition to the nomination from within the minority community itself, it's hard to see just how this could help George Bush politically." Now NBC is suggesting President Joe Biden's nomination of Jackson will boost him politically.

Black opinion writers were even more appalled with the Thomas pick. Barbara Reynolds of USA Today proclaimed, "If Hugo Black, who once was a member of the KKK, could become a distinguished liberal justice, there is hope that a Negro can turn black."

Columnist Carl Rowan punched low: "If you gave Clarence Thomas a little flour on his face, you'd think you had David Duke talking."

Then, two days before the Thomas hearings in September 1991, NBC's "Sunday Today" promised to provide the pros and cons of Thomas. But their "pro-Thomas" argument consisted of one question in a profile of black conservative Rep. Gary Franks (R-Connecticut), where anchor Garrick Utley found hypocrisy. Like Thomas, Utley said, Franks went to Yale "under an affirmative action program. Yet today, he battles the Democratic civil rights bill in Congress."

Then NBC aired a nasty anti-Thomas commentary by black reporter Bob Herbert. "Who is this guy, Clarence Thomas, and why should we want him on the Supreme Court? I can't think of any good reasons. The man is not distinguished and he doesn't seem to have a heart," Herbert lectured.

Then he called Thomas a "tool of the rich and powerful" backed by Dan Quayle, Jesse Helms and Strom Thurmond. "Even David Duke, former Ku Klux Klan leader, is crazy about Clarence Thomas. Make no mistake -- old people, poor people, black people, women, forget about it. Clarence Thomas is not your friend."

Barbara Reynolds attacked Thomas again in September. "Here's a man who's going to decide crucial issues for the country and he has already said no to blacks; he has already said if he can't paint himself white, he'll think white and marry a white woman." No liberal journalist will employ phrases like "saying no to blacks" or "painting herself white" to describe Jackson marrying a white man.

All this came before Anita Hill's sexual harassment smears in October 1991. Journalists tout black "lived experience" for the high court, but they savagely attack minorities who are conservative. Forget their experiences. The outpouring of media hostility felt like what Thomas described as a "high-tech lynching for uppity blacks who in any way deign to think for themselves."