Tim Graham
|
Posted: Apr 02, 2021 12:01 AM
Share   Tweet
The opinions expressed by columnists are their own and do not necessarily represent the views of Townhall.com. 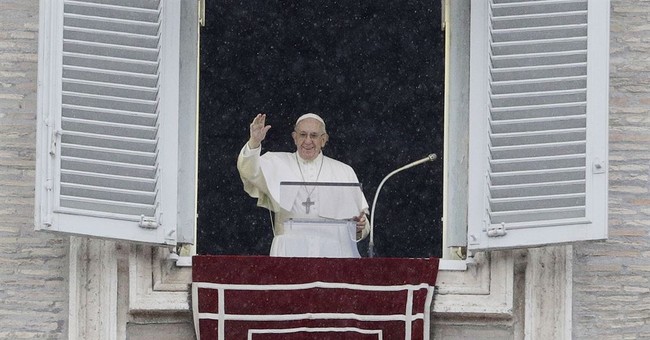 On Palm Sunday, Christians celebrate the arrival of Jesus in Jerusalem to great fanfare and celebration. But for CBS News, Palm Sunday is an occasion to throw wild, tabloidish allegations at the Catholic Church.

"Sunday Morning" host Jane Pauley began the program saying: "Today is Palm Sunday, the start of Christianity's Holy Week. Catholic priests take the leading role in their parishes, of course, even as a long-hidden issue within their ranks is coming out of the shadows."

Gay reporter Seth Doane explained: "Earlier this month, the Vatican confirmed priests cannot bless same-sex partnerships. But within this closed-off institution, there is an open secret."

This is not a poll or a study. This is a guess -- from someone who clearly wants to make the Catholic Church abandon all those antiquated scriptural passages and traditions. As a "news" network, this is just as responsible as asking someone to guess how many Muslim imams are secretly gay. But American news networks never say, "Hey, it's Ramadan. This is the best time to run a blistering advocacy piece against the backward people leading Islam!"

From there, Doane turned to Frederic Martel, "a French author who spent four years researching his book 'In the Closet of the Vatican,' about the gay underworld there." Doane added, "He says he interviewed hundreds of priests, even cardinals."

Martel claimed: "It is a large silent community, a vast silent majority. ... It is 50 shades of gay, I mean, a lot of different kinds of gay." Doane added, "He suggests the largest group of men in the Vatican may be gay but do not practice and can actually be the most homophobic." CBS never mentioned Martel is apparently a gay atheist.

Doane's next expert was a real beaut. "Francesco Mangiacapra is a sex worker with a law degree, who found one priest client led to another and another," he narrated. He asked Mangiacapra, "How many priests do you think you have slept with?" The male prostitute said, "I think about 100. ... We have, in Italy, many, many thousands of priests, so 100 is not so much."

Doane displayed a thick sheaf of paper and narrated: "Over roughly five years, Mangiacapra compiled this 1,200-page dossier of personal profiles, graphic photos and text message exchanges with roughly 50 of the priests who were his clients. He submitted it to his local archdiocese of Naples, he says, as a political act."

Every word of this CBS story is a political act.

Two gay priests were featured, Father Greg Greiten of Milwaukee and "Father Frederick," who spoke anonymously in the shadows. Greitens ended the piece by proclaiming: "This is my home. And I don't believe that the home should be throwing out its children."

Doane does not interview a Catholic defender of the traditional faith, neither clergy nor laity. No challenge of CBS' experts and wild numerical claims is allowed. There's no opposing side to the "truth," as in the liberal belief that progress against repressive Bible thumpers is inevitable. They don't deserve time to respond.

No liberal reporter seems to ask why "gay Catholics" wouldn't just find a more "welcoming" church, like the Episcopalians. Because the left wants the "backward" churches to be subverted to its ideology. This is just the latest crusading CBS "news" story of many that seek to shame the Vatican into abandoning thousands of years of tradition.