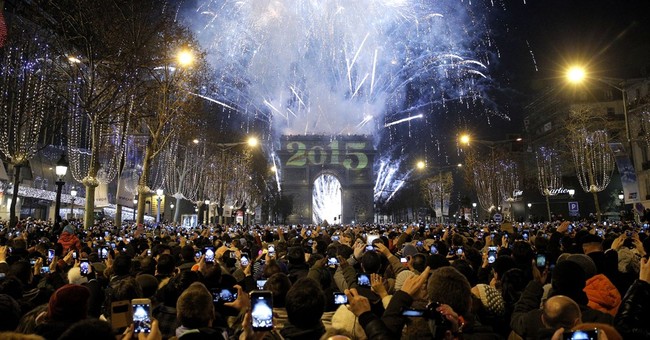 How shall we remember 2015? Or shall we try to forget it?

It is always hard to know when a turning point has been reached, and usually it is long afterwards before we recognize it. However, if 2015 has been a turning point, it may well have marked a turn in a downward direction for America and for Western civilization.

This was the year when we essentially let the world know that we were giving up any effort to try to stop Iran -- the world's leading sponsor of international terrorism -- from getting a nuclear bomb. Surely it does not take much imagination to foresee what lies at the end of that road.

It will not matter if we have more nuclear bombs than they have, if they are willing to die and we are not. That can determine who surrenders. And ISIS and other terrorists have given us grisly demonstrations of what surrender would mean.

Putting aside, for the moment, the fateful question whether 2015 is a turning point, what do we see when we look back instead of looking forward? What characterizes the year that is now ending?

More than anything else, 2015 has been the year of the big lie. There have been lies in other years, and some of them pretty big, but even so 2015 has set new highs -- or new lows.

This is the year when we learned, from Hillary Clinton's own e-mails, after three long years of stalling, stone-walling and evasions, that Secretary of State Clinton lied, and so did President Barack Obama and others under him, when they all told us in 2012 that the terrorist attack in Benghazi that killed the American ambassador and three other Americans was not a terrorist attack, but a protest demonstration that got out of hand.

"What difference, at this point, does it make?" as Mrs. Clinton later melodramatically cried out, at a Congressional committee hearing investigating that episode.

First of all, it made enough of a difference for some of the highest officials of American government to concoct a false story that they knew at the time was false.

It mattered enough that, if the truth had come out, on the eve of a presidential election, it could have destroyed Barack Obama's happy tale of how he had dealt a crippling blow to terrorists by killing Usama bin Laden (with an assist from the Navy's SEALS).

Had Obama's lies about his triumph over terrorism been exposed on the eve of the election, that could have ended his stay in the White House. And that could have spared us and the world many of Obama's disasters in the Middle East and elsewhere around the world. That is why it matters, and will continue to matter in the future.

Lying, by itself, is obviously not new. What is new is the growing acceptance of lying as "no big deal" by smug sophisticates, so long as these are lies that advance their political causes. Many in the media greeted the exposure of Hillary Clinton's lies by admiring how well she handled herself.

Lies are a wall between us and reality -- and being walled off from reality is the biggest deal of all. Reality does not disappear because we don't see it. It just hits us like a ton of bricks when we least expect it.

The biggest lie of 2014 -- "Hands up, don't shoot" -- had its repercussions in 2015, with the open advocacy of the killing of policemen, in marches across the country. But the ambush killings of policemen that followed aroused no such outrage in the media as any police use of force against thugs.

Nor has there been the same outrage as the murder rate shot up when the police pulled back, as they have in the past, in the wake of being scapegoated by politicians and the media. Most of the people murdered have been black. But apparently these particular black lives don't matter much to activists and the media.

No one expects that lies will disappear from political rhetoric. If you took all the lies out of politics, how much would be left?

If there is anything that is bipartisan in Washington, it is lying. The most recent budget deal showed that Congressional Republicans lied wholesale when they said that they would defund Obamacare, Planned Parenthood, and other pet projects of the Democrats.