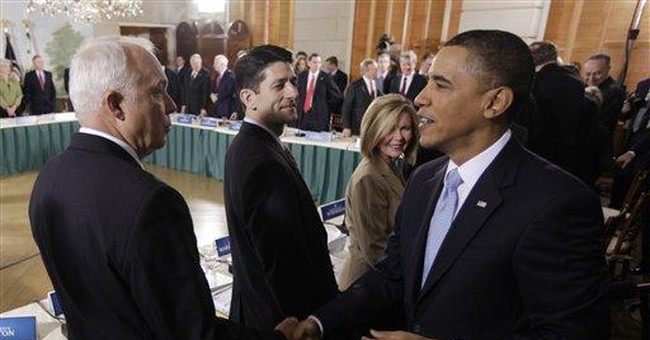 Whenever the party that controls the White House does not also control Capitol Hill, political pundits worry that there will be "gridlock" in Washington, so that the government cannot solve the nation's problems.

Almost never is that fear based on what actually happens when there is divided government, compared to what happens when one party has a monopoly of both legislative and executive branches.

The last time the federal government had a budget surplus, instead of its usual deficits, there was divided government. That was when the Republicans controlled the House of Representatives, where all spending bills originate, and Bill Clinton was in the White House. The media called it "the Clinton surplus."

By the same token, some of the worst laws ever passed were passed when one party had overwhelming majorities in both houses of Congress, as well as being led by their own President of the United States. ObamaCare is a product of the kind of arrogance that so much power breeds.

It was the same story back in the famous "first hundred days" of the New Deal in 1933. The National Industrial Recovery Act of 1933 clamped down on the American economy the kind of pervasive government control seldom seen outside of totalitarian countries.

It was the ObamaCare of its time, but covering industries right down to local dry cleaners. One man was sent to jail for charging less than the government-specified price for pressing a suit of clothes. This typified the mindset of the New Deal.

Fortunately, the Supreme Court eventually declared the National Industrial Recovery Act unconstitutional. But, before that happened, the N.I.R.A. probably did more to prevent the economy from recovering from the Great Depression than any other law or policy. Even liberal icon John Maynard Keynes said at the time that the N.I.R.A. "probably impedes recovery."

You cannot tell what effect a law or policy will have by what politicians call it, whether they label it a "recovery" program or a "stimulus" program.

Those who fear gridlock in Washington today implicitly assume that government actions are needed to "solve" the economy's "problems." That assumption has been so pervasive over the past 80 years that many people fail to realize that the republic existed for nearly twice that long before the federal government intervened to get the economy out of a recession or depression.

During all that time, no depression ever lasted even half as long as the Great Depression of the 1930s, when first President Hoover and then President Roosevelt intervened.

For most of the history of this country, there was no Federal Reserve System, which was established in 1914 to prevent bank failures and the bad effects of large expansions or contractions of the supply of money and credit. But bank failures in the 1930s exceeded anything ever seen before the Fed was established. So did the contraction of money and credit during the Great Depression.

The seductive notion that some Big Daddy in Washington can solve our problems for us-- whether healing the sick, preventing poverty or "growing the economy"-- is encouraged by politicians for obvious reasons, and the media echo the idea.

Both in Washington and in the media, there is virtually zero interest in comparing what actually happens when the federal government intervenes in the economy and when it does not.

More than a century and a half of ignoring downturns in the economy never produced a depression as deep or as long as the 1930s depression, with its many federal interventions, first under Herbert Hoover and then under Franklin D. Roosevelt.

The unemployment rate was 6.3 percent when the first big intervention took place, during the Hoover administration. It later peaked at 25 percent, but its fluctuations were always in double digits throughout the 1930s, as FDR tried one thing after another. As late as the spring of 1939, nearly a decade after the stock market crash of 1929, unemployment hit 20 percent again.