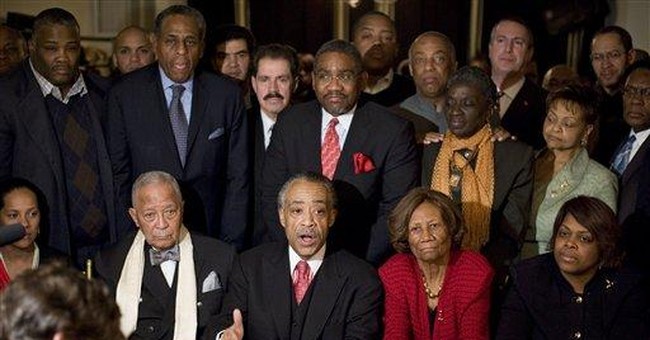 Playing the race card takes many forms. Judge Charles Pickering, a federal judge in Mississippi who defended the civil rights of blacks for years and defied the Ku Klux Klan back when that was dangerous, was depicted as a racist when he was nominated for a federal appellate judgeship.

No one even mistakenly thought he was a racist. The point was simply to discredit him for political reasons-- and it worked.

This year's target is the Tea Party. When leading Democrats, led by a smirking Nancy Pelosi, made their triumphant walk on Capitol Hill, celebrating their passage of a bill in defiance of public opinion, Tea Party members on the scene protested.

All this was captured on camera and the scene was played on television. What was not captured on any of the cameras and other recording devices on the scene was anybody using racist language, as has been charged by those playing the race card.

When you realize how many media people were there, and how many ordinary citizens carry around recording devices of one sort or another, it is remarkable-- indeed, unbelievable-- that racist remarks were made and yet were not captured by anybody.

The latest attack on the Tea Party movement, by Ben Jealous of the NAACP, has once again played the race card. Like the proverbial lawyer who knows his case is weak, he shouts louder.

This is not the first time that an organization with an honorable and historic mission has eventually degenerated into a tawdry racket. But that an organization like the NAACP, after years of fighting against genuine racism, should now be playing the game of race card fraud is especially painful to see.

Some critics of the Tea Party have seized upon banners carried at one of its rallies that compared Obama with Hitler and Stalin. Extreme? Yes. But there was nothing racist about it, since extreme comparisons have been made about politicians of every race, color, creed, nationality, ideology and sexual preference.

Some Obama supporters have long regarded any criticism of him as racism. But that they should have to resort to such a banner to bolster their case shows how desperate they are for any evidence.

Among people who voted for Barack Obama in 2008, those who are likely to be most disappointed are those who thought that they were voting for a new post-racial era. There was absolutely nothing in Obama's past to lead to any such expectation, and much to suggest the exact opposite. But the man's rhetoric and demeanor during the election campaign enabled this and many other illusions to flourish.

Still, it was an honest mistake of the kind that decent people have often made when dealing with people whose agendas are not constrained by decency, but only by what they think they can get away with.

On race, as on other issues, different people have radically different views of Barack Obama, depending on whether they judge him by what he says or by what he does.

As Obama's own books point out, he has for years cultivated a talent for saying things that people will find congenial.

You want a government that is open instead of secretive? He will say that. He will promise to post proposed legislation on the Internet long enough for everyone to read it and know what is in it before there is a vote. In practice, however, he has rushed massive bills through Congress too fast for anybody-- even the members of Congress-- to know what was in those bills.

Racial issues are more of the same. You want a government where all citizens are treated alike, regardless of race or ethnicity? Obama will say that. Then he will advocate appointing judges with "empathy" for particular segments of the population, such as racial minorities. "Empathy" is just a pretty word for the ugly reality of bias.

Obama's first nomination of a Supreme Court justice was a classic example of someone with "empathy" for some racial groups, but not others. As a Circuit Court judge, Sonia Sotomayor voted to dismiss a case involving white firefighters who had been denied the promotions for which they qualified, because not enough blacks or Hispanics passed the same test that they did.

A fellow Hispanic judge protested the way the white firefighters' case was dismissed, rather than adjudicated. Moreover, the Supreme Court not only took the case, it ruled in favor of the firefighters.

Obama's injecting himself into a local police matter in Massachusetts, despite admitting that he didn't know the facts, to say that a white policeman was in the wrong in arresting a black professor who was a friend of Obama, was more of the same. So is Obama's Justice Department overlooking blatant voter intimidation by thugs who happen to be black.

There is not now, nor has there ever been, anything post-racial about Barack Obama, except for the people who voted for him in the mistaken belief that he shared their desire to be post-racial. When he leaves office, especially if it is after one term, he will leave this country more racially polarized than before.

Hopefully, he may also leave the voters wiser, though sadder, after they learn from painful experience that you can't judge politicians by their rhetoric, or ignore their past because of your hopes for the future. Voters may even wise up to race card fraud.