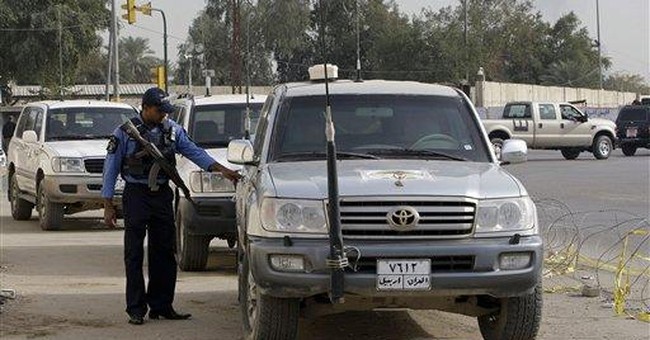 The Muslim major who was arrested for the murders of American soldiers at Fort Hood had left so many clues to his hatred of this country that all you had to do was count the dots, without even connecting them, to see where he was coming from. But for a fellow officer to alert higher authorities to the danger would have meant risking damage to his own career moreso than to that of Major Nidal Hasan.

That is because we have become so obsessed with political correctness that both common sense and self-preservation have to take a back seat. We don't dare "profile" anybody going through security checks because that's not politically correct. Far better to be blown to smithereens than to be politically incorrect.

Probably the country with the strongest security checks for airline passengers-- and the strongest reason for such checks-- is Israel. Israel profiles. I have been to Israel more than once and it is clear that they profile.

Fortunately, my wife and I obviously don't fit their profile, whatever that may be. Others who have been to Israel are amazed when I tell them that we have gone through Israeli security four times and they have never opened our luggage.

That is all the more surprising, since we take a lot of luggage. We have stopped in Israel while on trips completely around the world, including countries both above and below the equator, so we had to have clothing for hot weather and cold weather, since the seasons are the opposite in the northern and southern hemispheres. Moreover, I carry a lot of photographic equipment in a large, separate piece of luggage.

In short, our luggage could carry enough explosives to blow up any building in the country. But, whatever their security system and whatever their profile, they didn't seem to want to waste any time on us.

The last time we flew into Israel was from Cairo, where the Israeli security officials at the Cairo airport detained the lady in line in front of us for 45 minutes, opened her luggage, spread the contents across the counter, and asked her all sorts of questions. When they had finally finished with her and my wife and I stepped up to the counter, the official in charge waved us on impatiently, saying, "Hurry up, you'll miss the plane."

This was no special treatment for us. They had no idea who we were. We were just not the kind of people they spent time on, for whatever reason.

Recently, an Israeli security official was interviewed on Fox News Channel by Mike Huckabee. The official said that he has testified before Congress and offered to help with suggestions on how the American airport security system could be improved-- and he clearly thought it needed a lot of improvement.

Apparently the only response he got from American security officials was a polite letter. "They didn't tell me to go to Hell," he said. "They were polite."

There is no stronger indication of danger than officials who don't want to hear what anybody else has to say, even when those who offer to help have a system that works better than ours.

The fundamental issue goes beyond the Fort Hood massacre or the Christmas bomber. These are just symptoms of a larger set of attitudes and expediences reflecting the same outlook.

Putting terrorists on trial in American criminal courts, under rules designed for American citizens, tells you all you need to know about whether the Obama administration is serious about security or is still playing the political correctness game.