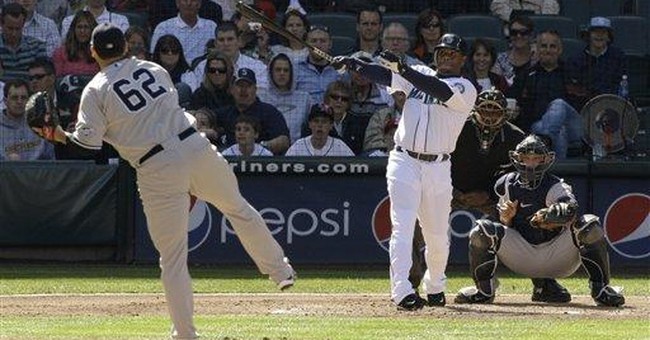 It is a good reflection on Americans that they tend to be on the side of the underdog. But it is often hard to tell who is in fact the underdog, or why.

Many years ago, there was a big, lumbering catcher named Ernie Lombardi whose slowness afoot was legendary. Someone once said that not only was Ernie Lombardi the slowest man who ever played major league baseball, whoever was second slowest was probably a lot faster runner than Ernie Lombardi.

When Lombardi came to bat, infielders played back on the outfield grass. That gave them more range in getting to balls that Lombardi hit. They could snare line-drives that would otherwise be base hits. With ground balls, they could easily throw to first base from the outfield grass and get the slow-moving Lombardi out.

Despite all that, Ernie Lombardi had a lifetime batting average of .306 and even led the league in batting a couple of years. But many people said that, if Lombardi had had just average speed, he could have been a .400 hitter.

One day, as a teenager sitting in the Polo Grounds, the stadium where the then New York Giants played, I was privileged to watch a historic event. Ernie Lombardi laid down a bunt!

The crowd went wild. The play took forever, with Lombardi laboriously clumping down to first base-- running as hard as he could, but still not very fast-- while the third baseman made a long run in from left field to get to the bunt.

We cheered ourselves hoarse rooting for big Ernie as he doggedly but slowly made his way down the first base line. He barely beat the throw, which set off another explosion of cheers.

We were not just cheering for a home-town player. We were rooting for Lombardi to get revenge on those who had taken advantage of him for so long. We were cheering for the underdog.

But was Lombardi really an underdog? How many players end up their careers with a lifetime batting average over .300 or with two batting titles? Like most of us, Lombardi was handicapped in some ways and privileged in others.

Many people would consider it a handicap to be a black orphan, born in the Jim Crow South during the Great Depression of the 1930s. But the home into which I was adopted had four adults and I was the only child. Many years later, when I was a parent and asked one of the surviving members of that family how old I was when I started walking, she said: "Oh, Tommy, nobody knows when you could walk. Somebody was always carrying you."

You can't buy that. A leading historian of education has said that the New York City public schools were the best in the country during the 1940s. That was when I went to school there. That was enough piece of sheer good luck that came my way. Today the classes are smaller, the buildings more modern-- but the education itself is a disaster. I got the kind of education that people have to go to expensive private schools to get today.

Perhaps more important, nobody told me that I couldn't make it because I was poor and black, or that I ought to hate white people today because of what some other white people did to my ancestors in some other time.

Nobody sugar-coated the facts of racial discrimination. But Professor Sterling Brown of Howard University, who wrote with eloquent bitterness about racism, nevertheless said to me when I prepared to transfer to Harvard: "Don't come back here and tell me you didn't make it 'cause white folks were mean."

He burned my bridges behind me, the way they used to do with armies going into battle, so that they had no place to retreat to, and so had to fight to win.

One of the problems with trying to help underdogs, especially with government programs, is that they and everyone else start to think of them as underdogs, focusing on their problems rather than their opportunities. Thinking of themselves as underdogs can also dissipate their energies in resentments of others, rather than spending that energy making the most of their own possibilities.

It must have been discouraging for Ernie Lombardi, especially in his early years, to be repeatedly thrown out at first base on balls that would have been base hits for anybody else. But he couldn't let himself dwell on that-- not and win two batting titles.