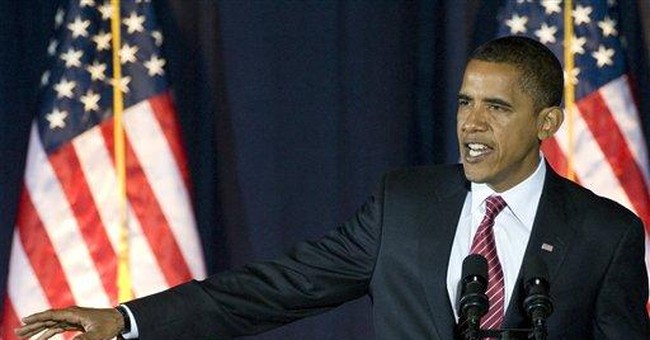 Some elections are routine, some are important and some are historic. If Senator John McCain wins this election, it will probably go down in history as routine. But if Senator Barack Obama wins, it is more likely to be historic-- and catastrophic.

Once the election is over, the glittering generalities of rhetoric and style will mean nothing. Everything will depend on performance in facing huge challenges, domestic and foreign.

Performance is where Barack Obama has nothing to show for his political career, either in Illinois or in Washington.

Politicians telling businesses how to operate? That's been tried in countries around the world, especially during the second half of the 20th century. It has failed so often and so badly that even socialist and communist governments were freeing up their markets by the end of the century.

The economies of China and India began their take-off into high rates of growth when they got rid of precisely the kinds of policies that Obama is advocating for the United States under the magic mantra of "change."

Putting restrictions on international trade in order to save jobs at home? That was tried here with the Hawley-Smoot tariff during the Great Depression.

Unemployment was 9 percent when that tariff was passed to save jobs, but unemployment went up instead of down, and reached 25 percent before the decade was over.

Economic disasters, however, may pale by comparison with the catastrophe of Iran with nuclear weapons. Glib rhetoric about Iran being "a small country," as Obama called it, will be a bitter irony for Americans who will have to live in the shadow of a nuclear threat that cannot be deterred, as that of the Soviet Union could be, by the threat of a nuclear counter-attack.

Suicidal fanatics cannot be deterred. If they are willing to die and we are not, then we are at their mercy-- and they have no mercy. Moreover, once they get nuclear weapons, that is a situation which cannot be reversed, either in this generation or in generations to come.

Is this the legacy we wish to leave our children and grandchildren, by voting on the basis of style and symbolism, rather than substance?

If Barack Obama thinks that such a catastrophe can be avoided by sitting down and talking with the leaders of Iran, then he is repeating a fallacy that helped bring on World War II.

In a nuclear age, one country does not have to send troops to occupy another country in order to conquer it. A country is conquered if another country can dictate who rules it, as the Mongols once did with Russia, and as Osama bin Laden tried to do when he threatened retaliation against places in the United States that voted for George W. Bush. But he didn't have nuclear weapons to back up that threat-- yet.

America has never been a conquered country, so it may be very hard for most Americans even to conceive what that can mean. After France was conquered in 1940, it was reduced to turning over some of its own innocent citizens to the Nazis to kill, just because those citizens were Jewish.

Do you think our leaders wouldn't do that? Not even if the alternative was to see New York and Los Angeles go up in mushroom clouds? If I were Jewish, I wouldn't bet my life on that.

What the Middle East fanatics want is not just our resources or even our lives, but our humiliation first, in whatever sadistic ways they can think of. Their lust for humiliation has already been repeatedly demonstrated in their videotaped beheadings that find such an eager market in the Middle East.

None of this can be prevented by glib talk, but only by character, courage and decisive actions-- none of which Barack Obama has ever demonstrated.