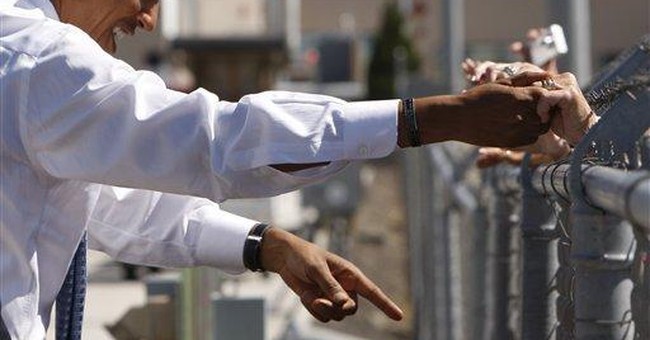 Jean-François Revel was not referring to the United States when he wrote those words, nor to his own France, but to human beings in general. He was certainly not referring to Barack Obama, whom he probably never heard of, since Revel died last year.

To find anything comparable to crowds' euphoric reactions to Obama, you would have to go back to old newsreels of German crowds in the 1930s, with their adulation of their fuehrer, Adolf Hitler. With hindsight, we can look back on those people with pity, knowing now how many of them would be led to their deaths by the man they idolized.

The exultation of the moment can exact a brutal price after that moment has passed. Nowhere is that truer than when it comes to picking the leader of a nation, which means entrusting that leader with the fate of millions today and of generations yet unborn.

A leader does not have to be evil to lead a country into a catastrophe. Inexperience and incompetence can create very similar results, perhaps even faster in a nuclear age, when even "a small country"-- as Senator Obama called Iran-- can wreak havoc anywhere in the world, when they are led by suicidal fanatics and supply nuclear weapons to terrorists who are likewise suicidal fanatics.

Barack Obama is truly a phenomenon of our time-- a presidential candidate who cannot cite a single serious accomplishment in his entire career, besides advancing his own career with rhetoric.

He has a rhetorical answer for everything. Those of us who talk about the threat of Iran are just engaging in "the politics of fear" according to Obama, something to distract us from "the real issues," such as raising taxes and handing out largesse with the proceeds.

Those who have studied the years leading up to World War II have been astonished by how many people and how many countries failed to see what Adolf Hitler was getting ready to do.

Even though Hitler telegraphed his punches, few people seemed to get the message. Books about that period have had such titles as "The Gathering Storm" and "Why England Slept."

Will future generations wonder why we slept? Why we could not see the gathering storm in Iran, where one of the world's leading oil producers is building nuclear facilities-- ostensibly to generate electricity, but whose obvious purpose is to produce nuclear bombs.

This is a country whose president has already threatened to wipe a neighboring country off the map. Does anyone need to draw pictures?

When terrorists get nuclear weapons, there will be no way to deter suicide bombers. We and our children will be permanently at the mercy of the merciless.

Yet what are we talking about? Taxing and spending policies, socking it to the oil companies and rescuing people who gambled on risky mortgages and lost.

Are we serious? Are we incapable of adult foresight and adult responsibility?

Barack Obama of course has his usual answer: talk. Rhetoric seems to be his answer to everything. Obama calls for "aggressive" diplomacy and "tough" negotiations with Iran.

These colorful adjectives may impress gullible voters but they are unlikely to impress fanatics who are willing to destroy themselves if they can destroy us in the process.

Just what is Senator Obama going to say to Iran that has not been said already? That we don't want them to develop nuclear weapons? That has already been said, every way that it can possibly be said. If talk was going to do the job, it would already have done it by now.

Go to the United Nations? What will they do, except issue warnings-- and when these are ignored, issue more warnings?

But what does Obama have besides talk-- and adoring crowds?