Georgia On Our Mind 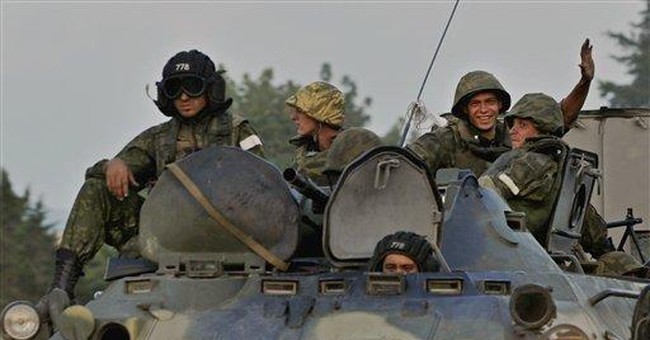 What is happening in the republic of Georgia is all too reminiscent of what happened back in 1956, when Russian tanks rolled into Hungary-- and the West did nothing.

An argument might well be made that, realistically, there was nothing the West could have done-- then or now-- that would have forced the Russians out.

But there was bitterness, then as now, that the West may have encouraged people to risk their lives, relying on us, when we knew from the outset that we were not about to risk armed conflict with a nuclear superpower over Hungary then or Georgia now.

The West has a long history of doing nothing, utilizing the United Nations, and before that the League of Nations, to create the illusion that they are doing something, when they make speeches and pass resolutions.

Neither speeches nor resolutions are going to make any difference to the Russians, to the Iranians or to any other belligerent nation. We know it, they know it and the world knows it.

Apparently Barack Obama doesn't yet know it, judging by his initial response to news of the Russian invasion of Georgia, which was to call on "both sides" to cease fire and then go to the U.N.

Later he changed his position to correspond to John McCain's more grown-up position that Russians have to pay a price if we expect them to change their behavior.

The real question is whether we can force the Russians to pay a serious price without ourselves paying a more serious price than we are prepared to pay. The Russians have already pointed out that the United States needs their cooperation on international problems.

These problems include the war on terrorism and perhaps the biggest problem of them all, Iran's movement toward building nuclear weapons that can be used either directly by Iran or-- more likely-- by turning some of these nuclear bombs over to terrorists whom Iran has been supplying with other weapons.

There are lots of things we can do, if we don't care about the repercussions-- but of course we do care. The only thing we have complete control over is what we say.

We have been saying far too much already, especially in proportion to what we were prepared to do. This is a problem that began long before this administration. Sometimes it has seemed as if our foreign policy is to speak loudly and carry a little stick.

American presidents, through several administrations, have been publicly commenting moralistically on the internal affairs of other countries around the world.

We have been criticizing friend and foe alike. Sometimes we have sounded like the world's nanny.

This has been more than a bad habit. Our nagging our friends and irritating our enemies has produced remarkably few benefits to anyone and much ill-will among countries whose cooperation we either have needed or will need.

Our butting into things that are none of our business has taken the form of actions as well as words. Extending NATO right up to the borders of Russia has been one of those feel-good actions, much like our feel-good moralizing to other countries.

Are we really prepared to go to war with Russia if they send troops into Latvia, a NATO member next door to them and thousands of miles away from us?

Some people seem to think that, if we had already included Georgia in NATO, Russia would not have attacked. But what if they attacked anyway? Would we have done any more than we are doing now?

Would that have protected Georgia or would our inaction have just brought the reliability of our protection of other NATO countries into question?

If anything, we ought to be thinking about pulling out of NATO ourselves. European countries already have the wealth to produce their own military defense. If they do not have the will, that is their problem. What American officials can do is keep their mouths shut if they don't intend to back up their words.