Thomas P. Kilgannon
|
Posted: Jan 19, 2022 12:01 AM
Share   Tweet
The opinions expressed by columnists are their own and do not necessarily represent the views of Townhall.com. 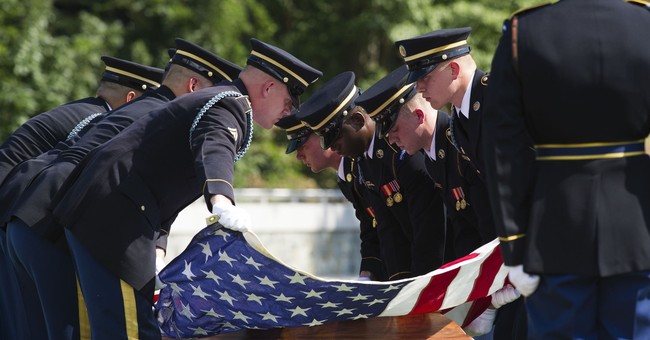 Dulles, Virginia – A friend was laid to rest in Arlington National Cemetery this week. At 38-years old, natural causes claimed him too soon, but there is solace in knowing his memory is preserved in a place of earthly honor and his soul rests in eternal glory. A 16-year veteran of the U.S. Marine Corps, GySgt Josh Miles was quietly patriotic and intensely engaged in serving his country and her citizens.

Josh grew up on a ranch in New Mexico where he learned to ride horses and to take care of himself. He loved the sense of freedom offered by the wide-open spaces. He was a gifted athlete who earned a try-out with the Kansas City Royals but also had a calling to serve his country. He enlisted in the Marine Corps, reported for duty, and began his first day of boot camp on September 11, 2001.

Josh excelled as a Marine, like he did in so many other pursuits. He was a Combat Instructor and a member of a FAST Platoon – Fleet Anti-Terrorism Security Team. Josh also fought in the Second Battle of Fallujah in Iraq, a vicious test of survival for Marines who went building to building to eliminate terrorists in close-quarter fighting.

Like so many veterans, Josh didn’t talk about his time in combat, but his decorations spoke volumes. For his actions in Fallujah, Josh was awarded the Navy and Marine Corps Achievement Medal with a distinguishing device for “heroic achievement.” His citation talks of then Corporal Miles taking charge of his squad and “braving enemy fire,” and “coordinat[ing] casualty evacuation.” It goes on to describe how Josh “courageously led his team as they cleared hundreds of buildings and houses” and how he “personally captured 11 suspected insurgents.”

Josh was a natural leader, so it’s not hard to imagine him exercising courage on the battlefield. But it’s difficult to recall him talking about those experiences.

Josh had a deep, booming voice that rivaled that of James Earl Jones. One day when he was at Camp Pendleton instructing his Marines, an officer took notice of his voice and determined Josh should be assigned to the Marine Barracks Washington, D.C. There, he took up the duties of Operations & Marketing Chief for the Marine Corps Battle Color Detachment which includes the USMC’s premier ceremonial unit, the Silent Drill Platoon.

Josh helped to teach some of the great achievements in American history and narrated more than 400 official events. Known as the “Voice of God,” Josh narrated a Marine anniversary event at Belleau Wood; the 65th reunion of the battle of Iwo Jima; an official tribute to the Marines of Montford Point who served during segregation; and the 2014 welcome ceremony for the new Commandant, General Joe Dunford. Josh’s voice set the stage for ceremonies featuring Presidents, Flag Officers, foreign dignitaries, honored veterans, and many other notable events.

After leaving the Marine Corps, Josh worked with me at Freedom Alliance where he oversaw our charitable programs which often have a life-changing impact. As a Marine, Josh was a Devil Dog – but at Freedom Alliance, he commanded a cadre of angels, delivering compassion to fellow veterans and Gold Star families. It was a labor of love; a vocation to which he was called.

Like many combat veterans, Josh's initial post-military years found him battling the demons that attach themselves to a warrior. But he overcame those struggles and dedicated himself to helping other veterans do the same. To them he was a mentor and confidant who answered his phone at all hours and listened intently.

But it wasn't just veterans for whom he cared. Any stranger could find themselves on the receiving end of Josh's assistance. One day I found Josh in attire that was soiled in blood and dirt before he had a chance to change his clothes. On his drive to work, Josh witnessed a horrific accident in which a motorcyclist crashed and severed his leg. Josh pulled over and put his life-saving skills to work, tending to the victim until an ambulance arrived. That was just one of many similar situations in which Josh inserted himself to help a fellow American in need.

But his family is who Josh loved most. His love for them was strong and natural, but he worked to continually strengthen those relationships. Because his deployments took him away for long periods of time, he was determined to make up for it after leaving the military. He planned weekends, vacations, and holidays such that his family would be together as much as possible.

Josh Miles was a devoted husband and father, a fighter for his friends, a blessing to Freedom Alliance, and a hero to his country.

Tom Kilgannon is the President of Freedom Alliance, a nonprofit organization that provides support to America’s military families and advocates for a strong national defense. @TomKilgannon3 on Twitter.