Thomas A. Bogar, PhD, has taught theatre history, dramatic literature, and theatrical production for forty years, most recently at Hood College in Frederick, Maryland, and directed over seventy theatrical productions. He holds a Ph.D. in theatre history/literature/criticism from Louisiana State University, an M.A. in play directing, and a B.A. in educational theatre, both from the University of Maryland.

In addition to Backstage at the Lincoln Assassination (Regnery History 2013), Mr. Bogar is the author of American Presidents Attend the Theatre (McFarland, 2006) and a biography of 19th-century actor-manager John E. Owens (McFarland, 2002). His writing has appeared in Washington History, Maryland Historical Magazine, Teaching Theatre, and Music Educators Journal.

Dr. Bogar is the recipient of two National Endowment for the Humanities fellowships. He also served as a judge for Washington's Helen Hayes Theatre Awards. 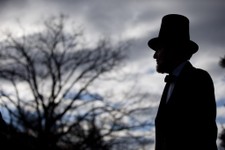