Terry Paulson
|
Posted: Jan 17, 2022 12:01 AM
Share   Tweet
The opinions expressed by columnists are their own and do not necessarily represent the views of Townhall.com. 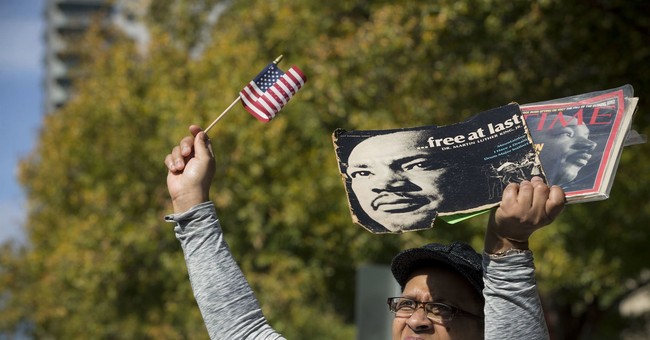 On this Martin Luther King Jr. holiday, it's impossible not to appreciate how black Americans have made a tremendous contribution to America. Yes, indeed, black lives matter. Watching Martin peacefully march for equal rights while being spit on, attacked, jailed, and eventually assassinated was hard to watch, but even more important to remember. His Christian faith and his leadership skills were put into action in a way that we honor this day.

King's "I Have a Dream" speech from the steps of the Lincoln Memorial creates as stirring a vision for America today as it did in August of 1963. His words still sound a hopeful challenge: "I have a dream that my four little children will one day live in a nation where they will not be judged by the color of their skin, but by the content of their character."

He wanted all races to be appreciated for contributing to our America's amazing racial mosaic. No one race belonged on a pedestal. No citizen deserved being hated for the color of his skin. Yes, Martin opened doors for
millions of black Americans. But it took men and women over the decades since to go through that door to use their character, drive, and gifts to succeed. They did it in spite of America's racial past and lingering pockets
of racism. Their contributions are numerous and ever growing.

Although I never voted for President Barrack Obama, when he was elected President of the United States, I recognized that it was a proud moment in American history. Even black parents could now say to their children-"Someday, you too could grow up to be President!" Yes, he destroyed the myth that millions of white American voters would never look beyond the color of a candidate's skin. No doubt, Martin Luther King, Jr. shed a tear while smiling down from heaven that day. Yes, becoming America's first black President did matter in a powerful way.

Black Secretary of State Condoleezza Rice has also made a difference. Some believe that she could have run for President and won. Through it all, Condoleezza Rice never allowed herself to entertain even a hint of victim
thinking. She took advantage of every hard-earned opportunity this great country provided her: "It was my mother and father, who, despite the fact that I was growing up in Jim Crow Alabama, always had me convinced that I could be President of the United States. They always taught me to just look past the obstacles. Either blast through them, or assume they're not in your way.... Growing up where I did in Alabama probably gave me a healthier respect for how far we've come. I don't carry anger about that period of time. I think it made me, and people like me, stronger. I just refuse not to be optimistic. You only have one life. And if you spend your entire life seeing obstacles and seeing clouds and assuming everybody's out to get you, then I think you're just likely to waste your life, and I'm just not going to do that."

You'd think on this Martin Luther King, Jr. birthday we'd be far enough along as a free society to be able to celebrate the progress made and the amazing success of so many black Americans. Unfortunately, the anger in
America today has rekindled a growing and unwelcome racial divide. There are shouts of "white privilege" and even demands for reparations for white racism. Such heated rhetoric and demands on the basis of race risk fueling new racism in blacks and whites. It risks doing damage to our society that could take decades to overcome.

Are we to throw out our visions of a color-blind society? Do character and civility no longer matter? Does working to earn one's own American Dream no longer extend to all? Are race and identity-politics the only thing that matter? Of course not! You have friends and colleagues of other races whose skin color means nothing because you know them by name. You love and deeply appreciate your relationship.

Never forget that fueling racial animus is dangerous. Confucius wisely warned, "Before you embark on a journey of revenge, dig two graves." Getting even on either side of a racial divide can never be the answer.

Dr. Ben Carson, noted black surgeon and President Trump's Secretary of Housing and Development, was saddened by the growing racial hatred and radical calls for defunding the police: "For a young black man, the most likely cause of death is homicide. ... How about we just remove the police for 24 hours. Can you imagine the chaos that would ensue? The vast majority of police are very good people. ...If you hire a plumber and he does a bad job, do you say all plumbers are bad? Let's go out and kill them? ... In cases where police are doing things that are inappropriate, I think we ought to investigate those promptly and justice should be swift." Defunding law enforcement is not the answer, but are there answers?

Carson added, "Instead of people pointing fingers at each other and just creating strife, what we need to be talking about is how do we solve problems in the black community." He said that African Americans need to return to "family and faith, ... the values and principles that got black people through slavery and segregation and Jim Crowism."

In 2015, when a white supremacist murdered nine worshippers at the historic Emanuel African Methodist Episcopal Church in Charleston, S.C., that massacre shocked the nation. Revenge and racial hatred were not their answer! In reaction to the racially motivated attack, that congregation, many of whom were family members of those killed, chose forgiveness over marching in protest and rage. Unlike Ferguson, Baltimore, New York, and Minneapolis, the race baiters and rioters stayed away. Citizens of all races embraced their courage and applauded their faith. Yes, in God's eyes, those black lives mattered because they affirmed that all lives matter.

Taking a stand for faith and family would mean decreasing the out-of-wedlock birth rate and affirming the stabilizing influence of fathers in reducing black on black crime and violence. If black lives do matter, it's time to stem the tide of black abortions which takes nearly 2,000 black babies every day.

Finally, Ben Carson added a challenge for his own party, "The Republican party needs ... programs that will help bring people out of poverty--to rise rather than simply be satisfied in a dependent position in our society." Demand nothing less, because as Martin Luther King, Jr. would certainly echo, black lives will always matter. America will never truly reach it's potential until all of our citizens truly believe that with hard work they too can succeed...and watch as their neighbors of all races applaud and appreciate their achievements. May it be so, Martin.

Could This Be the Reason Why Police Reportedly Didn’t Enter Texas School to Confront the Shooter?
Townhall
Bill Melugin wants to know where the Uvalde shooter got the money to buy those rifles and ammo
Twitchy
Bill Melugin Asks Great Question About How Uvalde Shooter Was Able to Buy Guns and Ammo
Redstate
EXPOSED: Amber Heard's Terrible, Awful, No Good Day in Court That Revealed 5 More Lies
PJ Media