Terry Paulson
|
Posted: Jan 01, 2021 12:01 AM
Share   Tweet
The opinions expressed by columnists are their own and do not necessarily represent the views of Townhall.com. 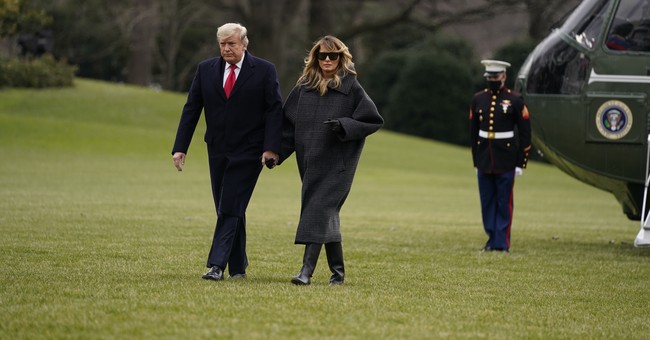 As we end the year, reality has the ring of a novel with twisting turns, intriguing characters, and a page-turning mystery where the outcome is still unclear. Who will be left standing to lead us after the January 20th inauguration? The media and political pundits are sure it will be Biden. Trump keeps pointing to developments on January 6th as the state electoral slates make their decisions known. The future will be revealed one day at a time.

But the end of any year requires a view into the rearview mirror. Millions of Americans are grateful for Donald Trump and the four years of his Presidency. Will there be four more years now or in 2024? Read the novel or the tea leaves for that answer. For now, here is my open letter of appreciation to President Donald Trump:

In 2016, I along with many Americans voted for an outsider, a non-politician. We were surprised and elated when you won. Mr. President, you delivered beyond our wildest expectations. While we smiled and at times fretted over your direct tweets to the world, you got busy delivering on your campaign promises. In business, you were a man of action. As a President, you were the same. Your stamina and your drive were astounding in the face of never-ending attacks.

In all honesty, my primary reason for voting for you was the role you could play in nominating conservative justices to the US Supreme Court. We can all be proud of the justices you nominated and were able to get confirmed by the Senate—Neil Gorsuch, Brett Kavanaugh, and Amy Coney Barrett. As originalist judges, they promise to uphold the Constitution and resist legislating from the bench. Their impact will be felt for years.

You lowered federal taxes on small businesses and individuals letting them keep more of what they earned. As a result, your first three years ushered in an economic boom that had not been seen in decades. Because of that growth, federal income tax revenue actually went up and would have grown if it were not for COVID-19. You joined Kennedy and Reagan in understanding the power of economic opportunity and income incentives. May we not forget the economic engine created when you lower taxes and decrease unnecessary regulatory controls.

You strengthened and increased funding for the military while ending fruitless conflicts and bringing more of our soldiers home. You were not afraid to send special forces on critical missions against terrorists and international bad characters. You were never afraid to meet with and negotiate with our enemies where possible, but you never forgot to put American interests first.

You worked to secure our Southern border, to give priority to those seeking legal immigration, to deport illegal immigrant violent criminals, and to protect the jobs and wages of American workers. Citizenship should matter, and you made sure it did by working to secure the rights and privileges of legal citizens. You gave border agents the support they asked for, and seriously decreased the number of illegal immigrants entering the United States.

You marshalled bipartisan support for The First Step Act (FSA), previously known as the Formerly Incarcerated Reenter Society Transformed Safely Transitioning Every Person Act, which was passed by the 115th Congress and signed by you in December 2018. Some called it the most significant criminal justice reform in years. It provided ways for inmates to earn early release for good behavior, gave judges more latitude in sentencing, and gave nonviolent offenders a better chance of reentering society as productive, law-abiding citizens.

Your final year has been preoccupied by the pandemic and how to work with states to deal with the threat. You tried to balance restraint and caution with the need for economic survival. You would upset those who wanted national lockdowns and those who wanted an open economy building a recovery. You ended up frustrating both groups, but, in the end, you unleashed American ingenuity to create vaccines and treatment options for COVID-19. Operation Warp Speed produced multiple vaccines in just nine months, an unheard of miracle that Democrats called a pipe dream. If Joe Biden takes office, he will try to take credit for taming the COVID dragon, but most Americans know that it was you, Mr. President, whose leadership eliminated the roadblocks and set the stage for a way to tame the threat.

Mr. President, you made a difference in so many ways. You’ve taught us to expect more from a President. Making promises is not enough; you need to deliver. And deliver you did. Your Presidential story remains a page turner, but know that those of us who voted for you say a resounding thank you for all you did for our country. Blessings to you, Mr. President, from your thankful supporters. We remember and will never forget what you have done.