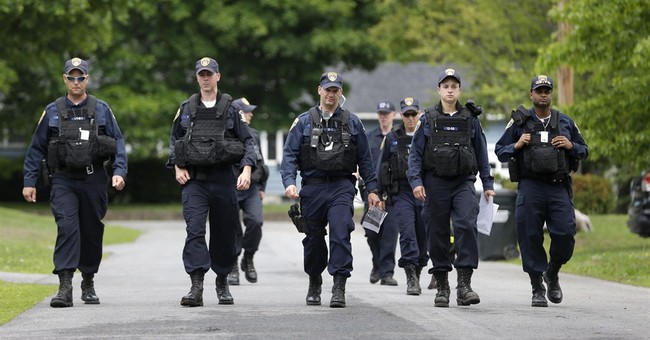 All lives matter. Blue lives matter. One poster reads, “Not in the news. Today, 1 million cops flawlessly protected your streets.” Flawlessly? No, perfect only happens in cop shows where they can retake bad scenes. With only 2.5 officers for every 1,000 citizens, flawless isn’t possible.

Sadly, cases like Eric Garner, Freddie Gray, and Walter Scott have provided the media with a continuous stream of nightly cell phone videos of “police officers acting bad” and have given demonstrators a rallying cry for their protests.

But today, crime is at historic lows and most cities are safer than they have been in generations. This deserves more accolades than derision, but Chuck Wexler, executive director of the Police Executive Research Forum, confessed, “People aren’t buying our brand. If it was a product, we’d take it out of the marketplace…. We’ve lost the confidence of the American people.”

Hold bad cops responsible, but it’s time to let some of our good officers receive the coverage and honor they deserve. Jimmy Capra, former DEA Chief of Operations and founder of the Frontline Leadership Group, says what most of our finest officers feel:

“There’s been a number of high profile cases over the decades of law enforcement officers failing to uphold their oath of office by violating civil rights and in some cases, engaging in criminal conduct. When instances like this arise, it literally grieves the law enforcement community, and we’re wounded as a result of the loss of public trust.

"That said, there are approximately 900,000 law-enforcement officers serving in this great country who daily race into the arena to protect, serve and love…yes love those individuals in their communities who they will never know. Most law enforcement professionals will tell you that this most honorable profession is not a job to us…it’s a calling….

"Our calling has nothing to do with power and influence over other citizens, it has everything to do with serving others first, to protect others, to defend the defenseless, to establish a standard against evil and to restrain and/or pursue evil at all costs.

"We’re a strange bunch, we’ll leave everything behind including our own family, safety, and security to help someone in need. We have this intrinsic need to make things right, to ensure justice is served. We run towards the cries for help, the screams in the night, and move toward the sound of gunfire. It becomes part of our DNA and has nothing to do with bravado, but everything to do with love.

"We also know that most Americans support law enforcement officers and their agencies even in such a time as this where some have condemned the police as armed occupiers instead of public servants.

"When my daughter became a police officer, I had the distinct honor of pinning on her badge. As I pulled her to the side holding back my tears, I told her, ‘Because of your calling, some you will serve will hate you because of what you represent; love them anyway. Some will lie and misrepresent your actions; love them anyway. You will see the most heinous things that human beings are capable of doing to each other. At the same time, if you look closely, you’ll see miracles in the making throughout your beat where you serve. Finally, you’ll be told by some that you’re not here to save the world. I’m telling you, you are here to save the world…. You’ll just do that one call at a time.”

The weapons officers carry will never control citizens unwilling to give them respect. It’s time for parents and grandparents to once again tell our children and grandchildren to respect and obey police officers instead of taunting and defying them. It’s time we stand for law and order and with those who keep it.

Pro-police rallies seldom make the news, but Bruce Heilman, attending a rally in Des Moines, confessed, "I'm ashamed of myself for never having said 'thank you' to a cop. It’s so long overdue." Join me in thanking those on the thin blue line who keep us safe every day.