The Value of Christian Faith in America 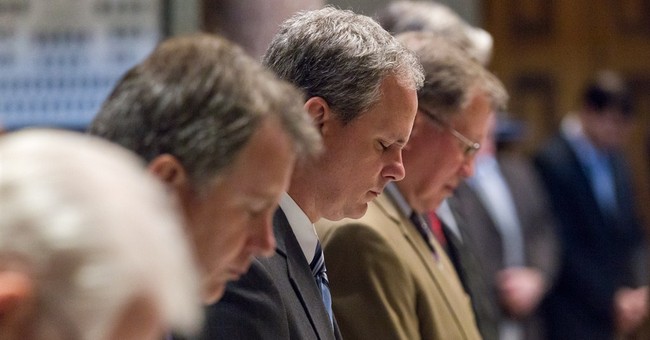 A recent Pew Research Center study found there has been a big drop since 2007 in the number of Americans who identify as Christian. Although 70 percent of Americans still describe themselves as Christian, more people are identifying with no religion at all.

The survey found Americans who call themselves atheist, agnostic, or of no particular faith showed the largest increase jumping from 16 percent in 2007 to nearly 23 percent in 2014. In the same period, Christians dropped from 78 percent to just under 71 percent.

Though not an affirmed Christian, George Washington realized the importance of religion in maintaining our republic. Washington stated in his Farewell Address, “Of all the dispositions and habits which lead to political prosperity, religion and morality are indispensable supports... And let us with caution indulge the supposition that morality can be maintained without religion. Whatever may be conceded to the influence of refined education on minds of peculiar structure, reason and experience both forbid us to expect that national morality can prevail in exclusion of religious principle.”

Harvard professor Clay Christensen shared an observation by a visiting Chinese Marxist. Religion is essential to the functioning of democracy because people of faith voluntarily obey laws. Believers are not just accountable to society but to God. Christensen added, “If you take away faith, you can’t hire enough police.”

Dostoevsky in The Brothers Karamazov observes, "If there is no God, all things are permissible." Ever since Moses came down from Mt. Sinai with his tablets, God erected his own “stop signs.” There is a right and wrong that believers are to use in guiding their actions. In a secular world trying to legitimize the rejection of long-accepted standards, God’s “stop signs” are not appreciated.

But there is more to faith than moral guidance. Non-believers are missing the experience of community that shared faith creates, the peace that comes from prayer and a relationship with God, and the call to service that faith inspires.

Canadian psychologist, Donald Meichenbaum, Ph.D., explores the research on the value of spiritual faith. One can call it group cohesiveness, connection or a sense of communion, but in the midst of millions in urban communities, people want to know that they are not alone—that people care. Studies confirm that participating in a faith community will make one more likely to behave in a selfless fashion, reinforce connections to others, enhance self-esteem, and make one more likely to ask for help. Sharing one’s story with others and ministering to those who face a similar situation can help surface the “blessings” that can come from overcoming hardship and adversities.

Prayer and meditation can bring peace and emotional relief. A belief in a “higher power” who is perceived as being in control and has a plan for one’s life makes what happens less arbitrary. What psychologists call an effective exercise in “religious reframing” can be experienced as prayer to a loving God. Asking for forgiveness and God’s acceptance can help control negative emotions like anger, guilt and shame while nurturing empathy.

Whether Christian promises of eternal life are true will require death to settle, but the belief of life after death can serve believers now. Faith communities support expressions of shared grief and mutual support. Lives are honored and the hope of heavenly reunions affirmed.

So, in spite of today’s secular attacks on the Christian faith, there is little doubt that faith has helped make America the beacon of hope, freedom, and opportunity that it is. You will have to decide whether faith serves you.