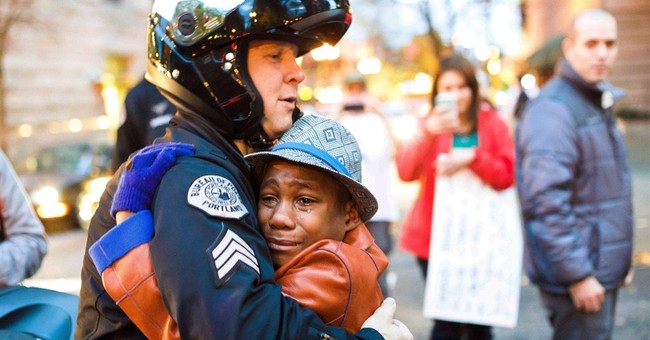 In the Spirit of the Christmas, we remember that answers sometimes come in seemingly insignificant beginnings. Two thousand years ago, in the midst of the all-powerful Roman Empire, a savior was born in a humble manger. Today, in a world preoccupied with deteriorating race relations, demonstrations turned into riots, and name-calling, some individuals are doing their part to reach across our racial divide and make a difference. In this season calling for hope, peace and new beginnings, let’s celebrate some Americans who deserve far more attention.

With race hustlers, looters and rioters taking advantage of peaceful demonstrations over the death of Michael Brown in Ferguson, MO, three well-armed black men stood guard over a white-owned gas station. Why? Loyalty and jobs. One 29-year-old black employee said of the owner, Doug Merello, "He's a nice dude, he's helped us a lot." Merello said of his employees, "We would have been burned to the ground many times over if it weren't for them." Mr. Merello’s treatment of his employees earned him respect and protection. What would the world look like if we all worked harder to earn mutual respect?

Not all businesses in Ferguson were as lucky.Natalie DuBose had a passion for baking and had finally saved enough to open Natalie's Cake's & More. Her shop wasn't spared when violent protests erupted. DuBose’s heart sank when she saw the damage, but, at a friend’s suggestion, she started an online campaign-- the GoFundMe campaign—raising over $240,000 to repair her bakery. DuBois said, "I am so grateful…. People have been showing love through the phone, leaving prayers, leaving songs — it's been absolutely amazing." All races contributed to Natalie’s new beginning.

Hiseloquent 650-word Facebook post went viral with over 400,000 likes in the first day. He had identified and articulated the mix of feelings many Americans of all races felt at the loss of a black teenager who died before he had a chance to learn from his mistakes. Benjamin ended with a faith-filled message:

“Ultimately the problem is not a SKIN problem, it is a SIN problem. … The cure for the Michael Brown, Trayvon Martin, Tamir Rice and Eric Garner tragedies is not education or exposure. It's the Gospel. So, finally, I'M ENCOURAGED because the Gospel gives mankind hope.”

At a Ferguson demonstration in Portland, a teary-eyed, 12-year-old Devonte Hart’s sign read “Free Hugs.” When Police Sgt. Bret Barnum approached the boy and asked him why he was crying, Devonte broke down. The Oregonian captured that moment as a white, helmeted police officer embraced a young black boy with tears streaming down his face. Devonte had lived on the streets until he was four; he’d already been shot at, consumed alcohol, and experienced severe abuse. Seven years ago, the Harts, who are white, had adopted DeVonte. Devonte’s mother said, “It’s one of the most emotionally charged experiences I’ve had…. (DeVonte) is living proof that our past does not dictate our future.” The photograph of Sgt. Barnum embracing Devonte went viral captivating thousands who want that kind of America.

Finally, a young Motown artist, Kevin Ross, was inspired to create a song for a commercial describing how using Glade Holiday Scent made him feel. The song became so popular that he made it into a full-length Christmas song. “This Is My Wish” has resulted in over half-a-million views on YouTube. Yes, America is still a place where a person of any race with a product or service that makes a difference can launch a new career. Download the song for free via a Glade website. For now, a line from his song provides a worthy end to this column—“Let love be the song that everybody sings….” Amen.