One Father's Lesson on Freedom, Free Enterprise and Fair Taxes 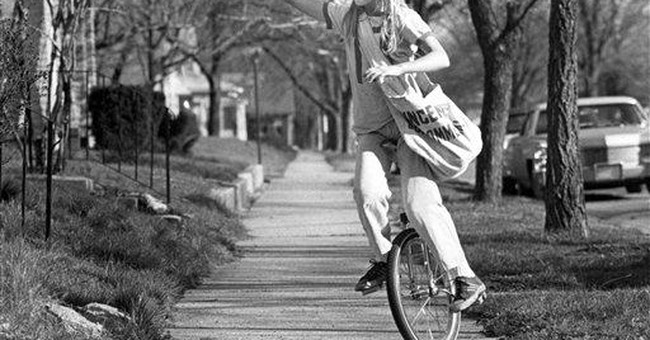 Son: “It’s obscene to see these executives get huge bonuses when its government money that kept their companies from going bankrupt.”

Dad: “I’m with you on that one. They had earned bankruptcies, not bonuses. When you are truly free to succeed, you are also free to fail. No one is really ‘too big to fail.’ Just like the airlines, bankruptcy allows them to restructure their business, learn their lesson and come out stronger and a bit wiser.”

Son: “Who cares about executives when there are over 10 million people out of work. The gap between the rich and poor just keeps growing! The rich keep making millions; most workers are lucky if they just have a job! I’m glad Obama is going to tax the rich. ”

Dad: “It may sound good to take more from the rich to help the poor, but economies don’t work that way. When the rich do well, they invest in starting new companies and hire people to make them work. They’re success means jobs and good salaries for workers. When the rich do poorly, the poor only get poorer.”

Dad: “Would you believe that President John Kennedy was the one that said ‘a rising tide lifts all boats’ and lowered taxes on the ‘evil’ rich? I think we need to have a little conversation about how free enterprise has and always will work.”

Dad: “If they can earn more somewhere else, they should take that job or start their own company! Life is difficult; it isn’t fair. Because you were born in America, you have a bedroom that’s bigger than homes in most poor countries. You’re lucky life isn’t fair, or you’d probably be living in a hut somewhere. Want to trade?”

Son: “No, but just giving half of a rich executive’s salary to those in need would make a real difference.”

Dad: “So you want to give their money, not yours.”

Son: “They have more than anyone could need!”

Dad: “That would seem true, but that’s for them to decide. Those ‘rich’ people donate the majority of the funds charities need. Bill Gates not only made billions with Microsoft; he’s made a difference with his billions.”

Sean: “Not all rich people give.”

Dad: “That’s their loss. When you invest in giving, the payoff isn’t in money. It’s in meaning. Good guys do finish first. If people don’t realize that, they don’t know what the finish line is.”

Son: “The poor are left behind!”

Dad: “In a world where rewards are distributed unequally, everyone is challenged to use their gifts to do something in a better, faster or unique way that people value enough to pay for. That’s why people create; that’s why they work hard, go to school, learn a craft or start their own company.”

Son: “Some have dead-end jobs!”

Dad: “Some politicians work to keep them there. They hate poverty so much that they reward it! Whatever you reward you get more of! So if my response to your entry-level job is to raise your minimum wage beyond its market value, you’re more likely to stay in that dead-end job. Why go to college or learn a new skill if you can get more money settling for a job with minimum skills? Capitalism is tough love. It fosters competition because it cares enough to challenge you to better yourself. A robust, free-market economy rewards achievement, service and good products and penalizes anything less.”

Sean: “Some people can’t get better!”

Dad: “Few can’t; many don’t. We need a safety net for the poorest of poor, but Obama is bankrupting America by turning a safety net into a cradle-to-grave hammock. Most Americans who politicians classify as “poor” have cars, multiple TVs and DVD players! Government studies show that only 5% of citizens remain chronically poor. Most are between jobs; many who were at one time poor become quite successful. It’s true that there are more out of work now because of the recession, but we should still reward people for achieving success, not for remaining poor.”

Dad: “The president’s plan involves printing more money or taxing some Americans, taking a cut to feed the government bureaucracy and then creating some short-term jobs that won’t last. He may be creating some jobs, but the money taken from Americans to pay for those jobs can’t be used to fund new companies. That’s why income and corporate taxes should be kept low and government spending cut! That stimulates the economic growth we need to generate wealth and create lasting jobs.”

Dad: “Really? After the ‘unfair’ Bush tax cuts, the top 20% percent of income producers went from paying 81% to 85% of the total income taxes? The bottom 40% of Americans went from paying nothing to getting a subsidy! When President Obama goes after the top 5% of Americans; they already pay 61% of the income tax. That’s not fair; that’s what I call criminal.”

Dad: “Okay, it isn’t a crime, but it should be. America can’t afford to keep punishing success in the worst recession since the Great Depression. The success of the rich helps everyone! I want everybody to get richer—the rich and the poor! I’m glad Bill Gates makes enough to give billions away! Even more important, his company has created jobs that support many families. With the Internet as the highway, his software advances have enabled many more to create unbelievable wealth all over the world. Microsoft’s success has also made good returns for investors. Just because someone becomes rich doesn’t make anyone else poor. In fact, in expanding economies, the more rich people there are, the more profits are created, the more people spend, and the more jobs are created.”

Son: “They should still pay more.”

Dad: “They do, and they will. But since you make more money monthly in your part-time-job than many of the world’s workers make in a year, should politicians take 40% of your paycheck to subsidize them?”

Dad: “Exactly! It’s more caring to help people earn their own money than to give them money. Too many Politicians make it sound like it’s caring to take from one American to and give to others. That’s not caring; that’s socialism.”

Son: “Isn’t giving the Christian thing to do?”

Dad: “Interesting! As a matter of faith, the Ten Commandments aren’t suggestions! It’s still a sin to covet the possessions of others. It’s a sin to take from others or to have someone do the taking for you. Jesus didn’t call on the government to care for the poor; that’s everyone’s job. The Good Samaritan didn’t tell the government to care for his neighbor; he paid for it himself. When you vote for politicians who will take more from your neighbor than what they take from you, I don’t call that Christian or noble.”

Son: “What are you doing now?”

Dad: “Writing a check to the Republican Party. This conversation is giving me all the motivation I need to support true hope and change in 2010. And before you vote or donate anything to the Democrats, you might think twice. Your generation is the one that is going to have to pay the bill for the deficits the Democrats are creating now!”