Incentives Matter and Always Will 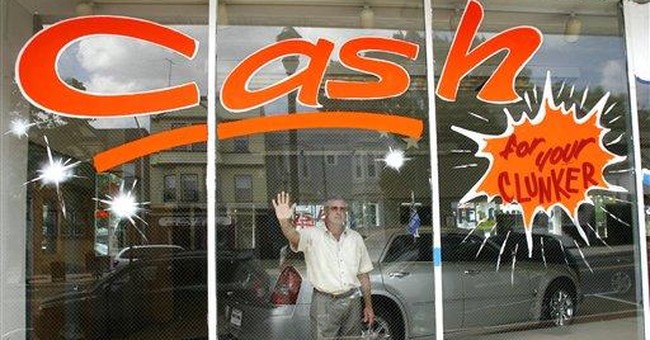 We can say with confidence that Americans love sales. They love good deals and “free” government services. Incentives matter and always will.

Washington’s first “cash for clunkers” program came and went quickly. The $2 billion set aside to cover the program for months was consumed within two weeks. As soon as it was launched, the ads flooded the newspapers and radio. New car buyers grabbed any clunker that moved and rushed to their favorite dealer. Auto makers reported record sales for the month. Why not? When the government is paying the incentive with your tax money, Americans will take what they can get. Bragging about their wonderful program, the Senate and Congress is wasting more of your tax money and adding a few more billions to the deficit.

Now, Washington is trying to convince us that more government “cash” for a “clunker” of healthcare plan will actually save money and improve quality of care. If the existing “cash for clunkers” plan is any predictor, we’re in for a wild ride to even higher deficits and a healthcare nightmare most Americans will hate!

There is no one healthcare plan, so let’s take a common sense look at how incentives are likely to play out. Once government-subsidized healthcare insurance is provided to an additional fifty million people for free or at a marginal cost, demand will explode. When millions of new patients unleash their laundry list of ailments that they have put off for years on the same number of already over-worked doctors, expect chaos not improved healthcare.

In free-enterprise economies, rapidly increasing demand usually results in increased prices. But when its businesses, insurance companies and the government that are paying those increases, demand continues to grow. Free services of any kind provide a strong incentive to seek more services. As a result, the funds budgeted for healthcare will prove as inadequate as the money set aside for the “cash for clunkers” program.

What do liberal politicians do when facing out-of-control costs? They increase taxes, add to the deficit by printing more money, pass price controls to cut costs or decline certain programs, procedures, or medications. Such choices just produce longer waiting for patients. Facing more work with less pay, many aging physicians will choose retirement. Those patients and healthcare service providers remaining are left with a disaster in the making.

We know incentives work, but liberals continue to act as though they can control people’s lives and destroy free-market incentives and people will still keep achieving, keep investing, keep hiring, keep serving, and, of course, keep paying higher and higher taxes. If the more you make, the more they take, why work harder?

What if the next time you went to a department store, they locked the doors, identified the top 10% of the wealthiest customers and forced them to pay for the purchases of all of the other customers in the store. If you received free purchases, you’d be surprised and certainly happy. You’d probably come back with your friends! But what are the chances those wealthy clients would return? How long would it take until you were now the top 10% forced to pay the whole bill? Incentives matter and always will.

Many economists believe that the recession is coming to an end and the economy will improve. The stock market has a long way to go to recoup losses, but progress has been made in recent months. Problems still remain. Although a “lagging indicator,” over 9% of Americans are still out of work and even President Obama suggests it may reach 10%. It’s true that the president has not “raised” anyone’s taxes…yet! But with the deficit hitting an all time high of over $1.27 trillion with no sign of abating any time soon, that day is coming. Even worse, with the incentives Obama’s administration is putting in place, you can expect stagflation—anemic growth, limited job creation and deficit-induced inflation.

What is the conservative answer? What it has always been—better incentives for new business growth and lower taxes for those who invest and produce that growth. With such a plan, this economy would turn around with the vitality and strength that it has always shown. But if we don’t reclaim our free-enterprise heritage, don’t expect other countries to invest their “cash” in our economic “clunker!”