Terry Jeffrey
|
Posted: Nov 21, 2018 12:01 AM
Share   Tweet
The opinions expressed by columnists are their own and do not necessarily represent the views of Townhall.com. 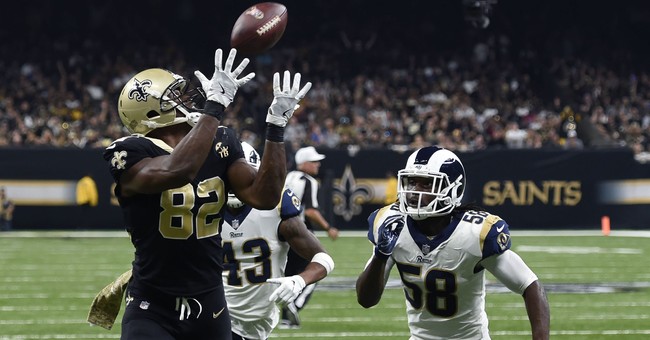 Charles Eliot, who served for decades as president of Harvard, hated football and led a crusade against it.

He lost -- and America won.

Eliot did not believe football genteel enough for college men. "In short," he wrote in his report on Harvard's 1892-93 academic year, "football cultivates strength and skill kept in play by all the combative instincts, whereas the strength most serviceable to civilized society is the strength which is associated with gentleness and courtesy."

The next year, Eliot escalated his attack on America's greatest game.

"The evils of the intercollegiate sports, as described in the president's report of last year, continue without real redress and diminution," he wrote in his annual report for 1893-94.

"In particular," he said, "the game of football grows worse and worse as regards foul and violent play and the number and gravity of the injuries which the players suffer. It has become perfectly clear that the game as now played is unfit for college use."

Eliot argued that other more civilized activities -- such as walking and biking -- were superior diversions for American schoolboys.

"The athletic sports and exercises which commend themselves to sensible teachers and parents are those which can be used moderately and steadily, and which remain available in some measure in mature life," he wrote. "Such are gymnasium exercises, walking, running, rowing, sailing, riding, cycling, tennis, gunning, bowling and fencing."

Not all Harvard officials agreed with Eliot.

Robert Bacon, who would eventually serve as secretary of state under President Teddy Roosevelt, graduated from Harvard in 1880 -- after serving as captain of the football team. In November 1893, as a member of the Harvard Board of Overseers, he asked Walter Camp to lead an investigation into the alleged problems with college football.

Camp, who played at Yale when Bacon played at Harvard, is properly considered the father of American football.

Following up on Bacon's request, he surveyed almost all the men who had played football at Harvard, Yale and Princeton in the years since 1876.

The survey discovered that only one player had died in a manner "attributed in any way to the sport."

"In that single case overtraining in several athletic lines was supposed to have weakened the constitution of the man, although no direct connection existed," Camp reported in "Football Facts and Figures."

He caustically pointed to a then-recent news story: "Five young men, students at Harvard, went sailing, their boat was upset in a squall, and all five were drowned. Had similar fatalities occurred in any of the sports called games, the shock to the community would have been so severe as to have prompted many letters to the newspapers and to the faculty, urging the forbidding of the sport."

Camp also published the views of Eugene Lamb Richards, a Yale mathematics professor whose son and namesake captained the school's 1884 football team. Richards conceded that there were evils football needed to remove or avoid, but argued that the game instilled virtues in young men in a way no other game did.

These were both moral and intellectual.

"It will surprise many good people who have been accustomed to hear such an epithet as 'brutal' applied to the game of football, that I claim for it, as the first point of superiority over other college athletic sports, that it is eminently an intellectual game," this Ivy League mathematician wrote.

"A game of football, between contestants evenly matched in other respects, is won by the superior mental work of the winning team as embodied in the generalship of the captain and the thoughtful work of his men," he said.

"If there is one virtue more to be desired in a manly character, without which indeed the character ceases to be manly, that virtue is courage," Richards wrote.

"And of the college sports there is not one which cultivates this manly virtue more than football," he said. "Neither is the courage required entirely physical. Indeed, the best players feel and see the danger which they brave. Conscious of injuries received, they often continue to face plays which may exaggerate their pains."

"The best teams at Yale," he said, "have had not only the best players, but the most successful teams have contained the most moral and religious men."

The year Camp's report came out, college football prohibited the flying wedge, making the game safer. Many other rule changes have been made since then, including, in 1906, legalization of the forward pass.

To the chagrin of those like Charles Eliot -- who would prefer that young men walk and bike -- football remains by far the most popular participation sport for American high school boys.

Among them, no doubt, are many of this nation's best future leaders, who will bring with them into adulthood lessons they learned on the field.