Will Obama and Kerry Declare ISIL Not Guilty of Anti-Christian Genocide?

Terry Jeffrey
|
Posted: Mar 02, 2016 12:01 AM
Share   Tweet
The opinions expressed by columnists are their own and do not necessarily represent the views of Townhall.com. 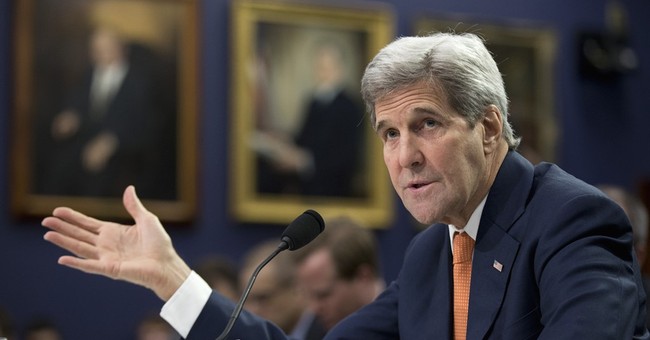 Will President Barack Obama and Secretary of State John Kerry falsely declare that the Islamic State is not guilty of genocide against Christians and other religious minorities in the areas it controls?

If so, they will show contempt for the truth.

"Not later than 90 days after enactment of this Act, the Secretary of State ... shall submit to the appropriate congressional committees an evaluation of the persecution of, including attacks against, Christians and people of other religions in the Middle East by violent Islamic extremists and the Muslim Rohingya people in Burma by violent Buddhist extremists, including whether either situation constitutes mass atrocities or genocide (as defined in section 1091 of title 18, United States Code) ..."

18 USC 1091 defines what it means to commit genocide as follows:

"Whoever, whether in time of peace or in time of war and with the specific intent to destroy, in whole or in substantial part, a national, ethnic, racial, or religious group as such -- (1) kills members of that group; (2) causes serious bodily injury to members of that group; (3) causes the permanent impairment of the mental faculties of members of the group through drugs, torture, or similar techniques; (4) subjects the group to conditions of life that are intended to cause the physical destruction of the group in whole or in part; (5) imposes measures intended to prevent births within the group; or (6) transfers by force children of the group to another group."

Has any reliable government source presented the Obama administration with evidence that the Islamic State has committed acts that fall within this definition?

The United States Commission on International Religious Freedom is an independent federal commission. Five of its nine commissioners were appointed by Democrats -- including three by Obama, one by Senate Minority Leader Harry Reid and one by House Minority Leader Nancy Pelosi.

The commission's 2015 annual report summarized the assault the Islamic State has launched against Christians -- and other religious minorities -- in Syria and Iraq.

"In June 2014, ISIL took the northern city of Mosul, overrunning Iraqi forces there, who dropped their weapons and fled," the commission said in its chapter on Iraq.

"ISIL issued an ultimatum that all Christians must convert to Islam, leave Mosul, pay a tax, or face death. The Christian community in Mosul dates back more than 1,700 years, with an estimated 30,000 living there before the ISIL offensive," it said.

"In August, ISIL captured Qaraqosh, the largest Christian town in northern Iraq, prompting an estimated 100,000 Christians to flee, and an assault on the Christian town of al-Kosh also led to an exodus of Christians. Nearly all Christians are believed to have left ISIL-held territory, with most fleeing to the KRG region." the report continued.

"For Yazidis, the ISIL ultimatum was to convert or die; they are not considered 'people of the book' and therefore not afforded the options to leave or pay a tax," said the commission. "In addition, thousands of Yazidi women and girls, including those who had not reached puberty, were kidnapped, raped, sold as sex slaves, or killed."

The commission said in a Dec. 7, 2015 statement: "USCIRF calls on the U.S. government to designate the Christian, Yazidi, Shi'a, Turkmen, and Shabak communities of Iraq and Syria as victims of genocide by ISIL."

"USCIRF further urges," the statement said, "a firm condemnation of the brutal persecution of, and crimes against humanity committed against, Sunni Muslims by the Assad regime in Syria and by ISIL in the case of Sunni Muslims who refuse to embrace their extremist ideology."

But Kerry and the Obama administration have not yet admitted that the Islamic State's actions fit the legal definition of genocide.

Testifying on Capitol Hill last week, Kerry said he had called for an "additional evaluation" to be done on the question.

"We are currently doing what I have to do, which is review very carefully the legal standards and precedents for whatever judgment is made," he said.

White House Spokesman Josh Earnest this week called the Islamic State's "slaughter" of Christians and Yazidis a "tactic." But he did not call it "genocide."

"We have long expressed our concerns with the tendency of -- well, not a tendency -- a tactic employed by ISIL to slaughter religious minorities in Iraq and in Syria," Earnest said.

"My understanding is, the use of that word [genocide] involves a very specific legal determination that has at this point not been reached," said Earnest.

The Islamic State's slaughtering and terrorizing of Christians, Yazidis and other religious minorities reaches the legal definition of genocide.

What is yet to be determined is whether it has reached the hearts of President Obama and his secretary of state.