Terry Jeffrey
|
Posted: Jan 07, 2016 12:01 AM
Share   Tweet
The opinions expressed by columnists are their own and do not necessarily represent the views of Townhall.com. 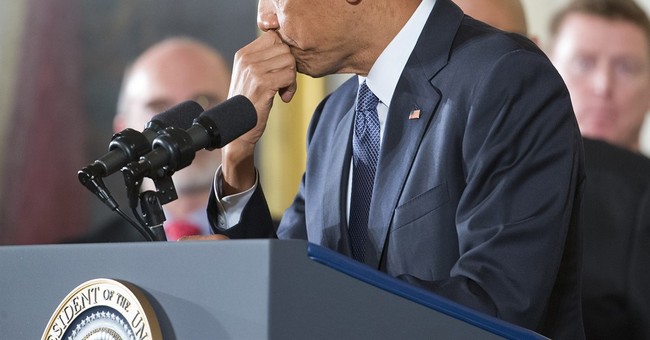 "Kings or parliaments could not give the rights essential to happiness, as you confess those invaded by the Stamp Act to be," John Dickinson wrote in 1766.

"We claim them from a higher source -- from the King of Kings, and Lord of all the Earth," he said in a public letter he signed simply "A North American."

"They are not annexed to us by parchments and seals," Dickinson said. "They are created in us by the decrees of Providence, which establish the laws of our nature. They are born with us; exist with us; and cannot be taken from us by any human power, without taking our lives. In short, they are founded on the immutable maxims of reason and justice."

Dickinson led the intellectual fight against a British Parliament that was seeking to usurp the authority of colonial assemblies and directly impose taxes on the people of the American colonies -- who would have no say in the matter.

Two hundred and fifty years later, President Barack Obama stood in the White House and professed a desire to protect the rights of Americans.

In a speech this week explaining his plan to take unilateral action on gun control, Obama cited "our right to worship freely and safely" and "our inalienable right to life and liberty, and the pursuit of happiness" -- accurately noting that these rights had been violated by murderers using guns.

But will one man making the rules for Americans protect our fundamental rights, or put them further at risk?

In the fall of 2009, when Congress was putting together the Obamacare legislation that would force Americans to buy health insurance, Sen. Orrin Hatch of Utah plainly warned of its implications.

"If that is held constitutional -- for them to be able to tell us we have to purchase health insurance -- then there is literally nothing that the federal government can't force us to do," Hatch told this writer in a video interview. "Nothing."

In a 5-4 decision in which he cast the crucial swing vote, Roberts swept aside the plain language of the law and ruled that the "requirement" to buy health insurance was not a requirement but an option and that the "penalty" enforcing the requirement was not a penalty but a tax. Therefore, he concluded, the government was not forcing Americans to buy health insurance; it was giving them the option of either buying insurance or paying a tax.

After Roberts delivered this nonsensical edict, it became inevitable the court would face another question: Can the government force people to buy, provide or cooperate in an insurance plan that covers -- as a "benefit" -- drugs and devices that take innocent unborn human lives.

Obama's Department of Health and Human Services commands that insurance plans provide these "benefits" in a regulation it issued under Obamacare.

This year, the Supreme Court will decide whether even Christian colleges and Catholic nuns must obey this command -- even though it forces them to act against the teachings of their faith while cooperating in a program that violates the right to life of the most vulnerable human beings.

The decision may again turn on one justice.

Last year, the Supreme Court ruled 5-4 that the 14th Amendment, ratified in 1868, created a "right" for people of the same sex to marry. Justice Anthony Kennedy, was the one man -- the swing vote -- who decided this "right" existed.

Justice Clarence Thomas, in dissent, accurately predicted: "Aside from undermining the political processes that protect our liberty, the majority's decision threatens the religious liberty our nation has long sought to protect."

"In our society, marriage is not simply a governmental institution; it is a religious institution as well," said Thomas. "Today's decision might change the former, but it cannot change the latter. It appears all but inevitable that the two will come into conflict, particularly as individuals and churches are confronted with demands to participate in and endorse civil marriages between same-sex couples."

This inevitable conflict between freedom of conscience and the court-declared "right" to same-sex marriage will itself go to the court -- where, again, one justice may decide the outcome.

"We all believe in the First Amendment," Obama said in his speech on gun control.

That is false. If Obama believed in the First Amendment, he would not be forcing East Texas Baptist University and the Little Sisters of the Poor to ask the Supreme Court to protect their free exercise of religion from his right-to-life-annihilating regulatory command.

In the 1760s, Americans understood that when the British Parliament usurped the power of their colonial assemblies it was not just taxation at stake, it was their God-given rights.

This will always be the case when power concentrates in the hands of those who most zealously seek it.