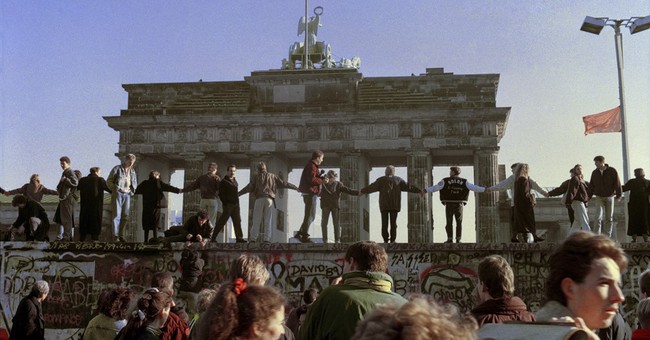 Why did the Marxist atheists who controlled the Soviet Union tear down the Berlin Wall?

Did the Western leaders who forced Soviet communism to collapse shrink from proclaiming the truth of the Bible or the fact that free societies are based on a rule of law rooted in the natural law that God engraves on every heart?

In 1983, when President Reagan told the National Association of Evangelicals that the Soviet Union was an "evil empire," he described the conflict with communism as a religious one.

He did not argue that America was perfect or deny the wrongs of our past. But he did declare that it was our religious faith that kept us free.

"There is sin and evil in the world, and we're enjoined by Scripture and the Lord Jesus to oppose it with all our might," Reagan said.

"Our nation, too, has a legacy of evil with which it must deal," he said. "The glory of this land has been its capacity for transcending the moral evils of our past. For example, the long struggle of minority citizens for equal rights, once a source of inequality and civil war, is now a point of pride for all Americans.

"We must never go back," Reagan said. "There is no room for racism, anti-Semitism, or other forms of ethnic and racial hatred in this country."

"But whatever sad episodes exist in our past," said this great president, "any objective observer must hold a positive view of American history, a history that has been the story of hopes fulfilled and dreams made into reality. Especially in this century, America has kept alight the torch of freedom, but not just for ourselves but for millions of others around the world."

Reagan did not doubt what kept that torch burning.

"[F]reedom prospers only where the blessings of God are avidly sought and humbly accepted," he said. "The American experiment in democracy rests on this insight."

Reagan -- as president -- advocated prayer for the conversion of the communists.

"Yes, let us pray for the salvation of all those who live in that totalitarian darkness, pray they will discover the joy of knowing God," he said. "But until they do, let us be aware that while they preach the supremacy of the state, declare its omnipotence over individual man, and predict its eventual domination of all peoples on this Earth, they are the focus of evil in the modern world."

Four years later at the Brandenburg Gate, as this column has noted before, Reagan argued that an inerasable cross pointed Eastern Europe toward a rebirth of freedom.

"Years ago, before the East Germans began rebuilding their churches, they erected a secular structure: the television tower at Alexander Platz," Reagan said. "Virtually ever since, the authorities have been working to correct what they view as the tower's one flaw, treating the glass sphere at the top with paints and chemicals of every kind. Yet even today when the sun strikes that sphere -- the sphere that towers over all Berlin -- the light makes the sign of the cross. There in Berlin, like the city itself, symbols of love, symbols of worship, cannot be suppressed."

The same day Reagan said those words in Berlin, Saint Pope John Paul II was saying what The New York Times described as "a mass attended by about 1.5 million people" in Gdansk, Poland.

"In the totalitarian and authoritarian regimes, the principle that force predominates over reason was carried to the extreme," he wrote in Centesimus Annus, published in 1991. "Man was compelled to submit to a conception of reality imposed on him by coercion, and not reached by virtue of his own reason and the exercise of his own freedom.

"This principle must be overturned," he said, "and total recognition must be given to the rights of the human conscience, which is bound only to the truth, both natural and revealed. The recognition of these rights represents the primary foundation of every authentically free political order."

One reason John Paul II cited for reaffirming this principle was: "because in some countries new forms of religious fundamentalism are emerging which covertly, or even openly, deny to citizens of faiths other than that of the majority the full exercise of their civil and religious rights, preventing them from taking part in the cultural process, and restricting both the Church's right to preach the Gospel and the rights of those who hear this preaching to accept it and to be converted to Christ.

"No authentic progress is possible without respect for the natural and fundamental right to know the truth and live according to that truth," said John Paul II. "The exercise and development of this right includes the right to discover and freely to accept Jesus Christ, who is man's true good."