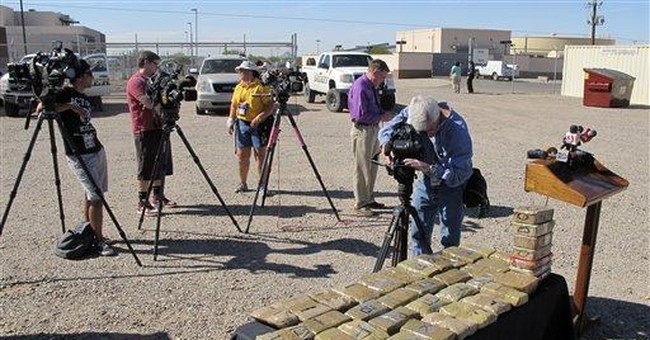 Who should Americans see as worthier candidates for entering our country? Syrian Christians fleeing persecution -- and possible beheading by the Islamic State -- or smugglers moving drugs across our Mexican border?

Under existing U.S. law, a Christian fleeing from regions in Syria threatened or controlled by the Islamic State could claim asylum here. A smuggler moving drugs across our border has no justification at all.

Yet the way our federal government operates today, drug smugglers routinely cross our border while Christian refugees from Syria almost never do.

A recent report and a data set released by the Obama administration put this in perspective.

The Drug Enforcement Administration's 2015 National Drug Threat Assessment Summary, published in October, spells out the consequences of the government's failure to adequately enforce the U.S-Mexico border.

"The most significant drug trafficking organizations operating in the United States today are the dangerous and highly sophisticated Mexican transnational criminal organizations (TCOs) that continue to be the principal suppliers of cocaine, heroin, methamphetamine, and marijuana," said DEA acting Administrator Chuck Rosenberg, in a letter introducing the threat assessment.

"These organizations are responsible for the extreme violence seen in Mexico, as these groups battle for turf and attack public officials and innocent civilians," he said. "Domestically, affiliated and violent gangs are increasingly a threat to the safety and security of our communities. They profit primarily by putting drugs on the street and have become crucial to the Mexican cartels."

"The foundation of Mexican TCO operations in the United States is comprised of extended family and friends," says the DEA threat assessment. "Families affiliated with various Mexican TCOs in Mexico vouch for U.S.-based relatives or friends that are deemed trustworthy enough to help run various aspects of the drug trafficking operations in the United States. Actual members of Mexican TCOs are usually sent to important U.S. hub cities to manage stash houses containing drug shipments and bulk cash drug proceeds."

"Mexican TCOs transport the bulk of their drugs over the Southwest Border through ports of entry (POEs) using passenger vehicles or tractor trailers," said DEA.

"Mexican TCOs also smuggle drugs across the Southwest Border using other methods," said the summary. "Marijuana is occasionally trafficked through subterranean tunnels connected to a network of safe houses on both the Mexico and the U.S. sides of the border. Mexican TCOs also transport marijuana via commercial cargo trains and on small boats, often referred to as 'pangas,' from the West Coast of Baja California north to the central California coast. Finally, Mexican TCOs have also transported drugs across the Southwest Border using ultralight aircraft."

As Susan Jones of CNSNews.com reported, the assessment also notes that drug overdoses have become the leading cause of injury deaths in the United States -- outnumbering those caused by motor vehicle accidents and guns.

While the number who died from overdosing on opioid-containing controlled prescription drugs (16,235) outnumbered those who overdosed on cocaine (4,944) and heroin (8,257) in 2013, the annual number of deaths from heroin overdoses has jumped in recent years -- rising from 2,402 in 2007.

A State Department database on the flow of refugees also puts perspective on U.S. border enforcement.

As Patrick Goodenough of CNSNews.com reported this week, the State Department's data showed that, as of Monday, 2,184 Syrian refugees had been admitted to the United States since 2011. 2,098 of these were Muslims. Only 53 were Christians.

A rational policy for our government -- one aimed at protecting human life and liberty as well as our American way of life -- would seal our borders against drug smugglers and radical Islamic terrorists while opening a generous but carefully monitored portal to persecuted Middle Eastern Christians.