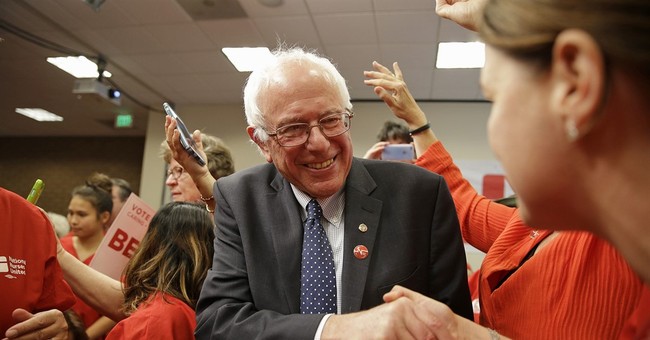 Sen. Bernie Sanders of Vermont deserves credit for a certain candor many of his congressional colleagues lack. He calls himself, according to The New York Times, a "democratic Socialist."

In Oakland on Monday, Sanders, who is running for president, ranted against what he called "the billionaire class" and called for redirecting the redistribution of wealth in America.

"What our campaign is about is creating a political revolution, which says to the billionaire class, they can't have it all, this country, our government, belong to all of us," he said.

"Over the last 30 years, there has been a massive redistribution of wealth," Sanders said. "Problem is, that redistribution has gone in the wrong direction, has gone from the middle class and working families to the top one-tenth of one percent, and we are saying enough is enough. We are going to bring that money back to the middle class."

Part of his solution, not surprisingly, is to tax "billionaires" more.

We need, he said: "A nation in which we have a tax system which is fair, which says to the billionaires you can't have it all, you're going to start paying your fair share."

So who shoulders the federal tax burden in America and who does not? Is the dividing line drawn between the rich, who do not pay their fair share, and the rest of us who pay more than our fair share?

This spring, the Internal Revenue Service published a report titled "Individual Income Tax Shares, 2012." It showed that there is a definite dividing line between those who do and do not pay a significant share of federal individual income taxes (which do not include the payroll taxes we pay supposedly to cover our future Social Security and Medicare benefits).

For 2012, according to the IRS, Americans filed 136.1 million individual income tax returns, not counting those filed by dependents.

Analysis of these, the IRS reported, reveals that the federal income tax is progressive -- hitting people harder the more they earn.

"As expected for a graduated income tax system," said the IRS, "the top 0.001 percent through the top 50 percent of returns recorded a larger share of the income tax compared to their respective share of AGI [Adjusted Gross Income]."

"In addition, for 2012," said the IRS, "every single percentile from the top 0.001 percent through the top 50 percent reported an increase in its share of AGI and its share of income tax in comparison to 2011."

According to the IRS, the top 3 percent of earners paid more than half of all income tax and the top 10 percent paid the vast majority of it.

"The top 3 percent of tax returns accounted for more than half (51.7 percent) of the total income tax paid for Tax Year 2012," said the IRS.

But the most remarkable threshold was at the halfway point among Americans filing individual income tax returns.

That means: The bottom 50 percent of federal individual income tax filers, when ranked by their adjusted gross income, accounted for 11.1 percent of AGI but paid only about 2.8 percent of the income tax.

The lesson: If you want to pay more income taxes in the United States, work hard and make more money.

At some point during 2013, according to the Medicaid and CHIP Payment and Access Commission, 80.1 million Americans were enrolled in Medicaid (71.7 million) or the Children's Health Insurance Program (8.4 million). That equaled 25.3 percent of the population.

The class struggle American politicians are now fostering is not between the billionaires and the rest of us. It is between those who work hard and take care of their own families and those who have surrendered themselves to government dependency.