When Did America Peak? 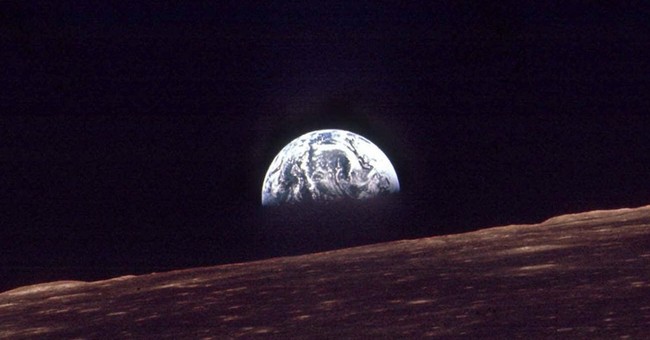 Is America on its way up? Or down?

Within the USS Yorktown, which serves as a floating museum at Patriot Point in South Carolina, there is a replica of the Apollo 8 capsule that went to the moon and back at Christmastime 1968.

The Yorktown was there -- 47 years ago -- to pick up the real Apollo 8 when it splashed down in the wide-open Pacific, carrying the first crew of human beings to ever circle the moon.

Nearby that Apollo 8 replica -- on the hangar deck of the Yorktown -- sit a number of propeller-driven aircraft, representing the warplanes that flew off U.S. aircraft carriers during World War II.

Together these flight machines point to the remarkable upward trajectory America followed in the first two and a half decades after that war.

The last Apollo spacecraft to reach the moon splashed down in December 1972 -- almost 43 years ago. Today, America shares something called the International Space Station with Russia and other nations. It sits in low Earth orbit.

Two generations of Americans have come of age in a nation that does not send men to the moon.

In January 1973, a month after the last Apollo moon flight, the Supreme Court declared that killing an unborn child was a "right." That year, America aborted 744,610 babies, according to an estimate by the Guttmacher Institute. Between then and 2014, National Right to Life estimates, America has aborted 57,496,011 babies. That is more than the entire population of this country, 50,189,209, from the 1880 census.

In 1968, according to the Bureau of Economic Analysis, the real Gross Domestic Product of the United States grew at 4.9 percent. The last time real GDP grew at that annual rate or higher was 1984, when it hit 7.3 percent. In the first 14 years of the 21st century, annual growth in real GDP has exceeded 3 percent only twice. The last time was a decade ago -- in 2005.

And the decline we are facing is measurable not only in lost lives and material well-being.

In a column this week, Pat Buchanan cited a Pew Research Survey on the decline of religion in America. "Whereas 86 percent of Americans in 1990 identified as Christians, by 2007, that was down to 78 percent," Buchanan wrote. "Today only 7 in 10 say they are Christians. But the percentage of those describing themselves as atheists, agnostics or nonbelievers has risen to 23."

It is not a spaceship that is now dropping out of orbit; it is our country.

America has never been a perfect nation, but it has always been a great one. That greatness was rooted in a pioneering spirit, propelled by faith in God, family and self-reliance.

If we do not return to those values, we will crash.