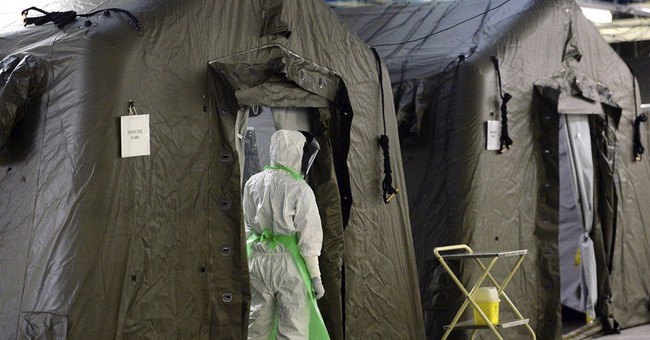 Trending
When people travel from Ebola-stricken nations to the United States, there is one certain way to prevent them from transmitting that virus here: Quarantine them long enough to know they are not infected.

Then there is a way that puts Americans at risk: Let people travel here from stricken regions. Let them roam freely -- until they show symptoms. Then trust that you can rush them into isolation before they expose others.

Thomas Eric Duncan, according to the Dallas Morning News, is a Liberian who wanted to immigrate to the U.S. and marry his son's mother, who lives in Dallas. In August, according to the paper, Duncan got a visa to travel here.

Four days before he flew to America, according to the New York Times, Duncan helped his landlord's Ebola-stricken daughter travel to and from a hospital before she died. Then before boarding a flight to Brussels to connect to the United States, the Times reported, he stated in a form that he had not been exposed to anyone with Ebola in the previous 21 days.

Dr. Thomas Frieden (director of the CDC), Dr. David Lakey (Texas commissioner of health), and Clay Lewis Jenkins (a Texas judge) held a press briefing Sunday to explain the government's strategy for dealing with Ebola in the wake of Duncan's diagnosis.

They spent part of the briefing describing the government's efforts to track down a homeless American.

They believed -- but did not know for sure -- that this homeless man in Dallas might have been exposed to the Ebola virus Duncan brought from Liberia. ("The man rode in the ambulance that took Mr. Duncan to the hospital, before the vehicle was taken out of service and cleaned," the Times later reported.) They feared that if they did not find him, he might ultimately expose other Americans to the disease.

This homeless man's experience is an example of how our government expects its Ebola policy to work.

At Sunday's briefing, Dr. Frieden first explained how Ebola is spread and how it can be contained.

"Ebola only spreads by direct contact with someone who's sick or with their body fluids," said Frieden.

It is only transmitted by people who already show symptoms, and people can go as long as 21 days post-exposure before they do.

"So the core of control," Dr. Friedan said, "is identifying everyone who might have had contact with them and making sure they're monitored for 21 days and, if they develop symptoms, immediately isolating them to break the chain of transmission."

Frieden then said the government had identified 48 people who had at least some risk of contracting Ebola from Duncan. These included three "family and community contacts," "seven health-care workers," and "about 38 other people in whom we could not rule out that they had contact."

Thus, because a single Liberian visitor was not quarantined for 21 days before he was allowed to move freely in the United States, our government now believes it must monitor 48 people inside the United States--and be ready to immediately put them in isolation if they show symptoms of the virus Duncan brought with him.

At the briefing, Judge Jenkins revealed that one of the 48 people the government was trying to monitor -- the homeless man -- was missing.

"We have our Dallas County Sheriff's Department and Dallas Police Department teams on the ground now and they have been there since last night," he said. "We are working to locate the individual and get him to a comfortable, compassionate place where we can monitor him and care for his every need during the full monitoring period."

Jenkins stressed this the missing man was "asymptomatic," and "you have zero chance of contracting the Ebola virus from an asymptomatic individual."

Dr. Frieden sought to strike a reassuring note. "Even though he has gone missing, I'm confident that the folks in Texas found him before and can find him again," he said.

Dr. Lakey also sought to sound a reassuring note. "If he's listening right now, again, we want to make sure that we address his needs and monitor him compassionately."

A reporter asked if the homeless man knew the government was looking for him.

"The answer is, yes he does," said Dr. Lakey. "We were able to bring him in yesterday and again monitor him. Check his temperature, evaluate him, and told him to stay there and that we needed to follow him and he left and that's why we have sort of escalated this to make sure that, again, we are able to closely monitor him."

The authorities did find the homeless man. On Monday, the Associated Press reported what happened to him.

"A Dallas city spokeswoman says health officials concerned with the spread of Ebola are using a state order to keep a homeless man quarantined so that his health can be monitored," said the AP. "Sana Syed said Monday the 52-year-old man is being held at an undisclosed location in Dallas."

Health-care workers and military personnel who go to Africa to help people suffering from Ebola and to help contain the disease are doing a great and charitable deed.

An American policy that allows people from Ebola-stricken regions to travel here without a quarantine period -- so long as they are "asymptomatic" -- will also apparently require the quarantining of "asymptomatic" Americans whom the government cannot "rule out" had contact with an Ebola victim, but who are not amenable to daily monitoring.