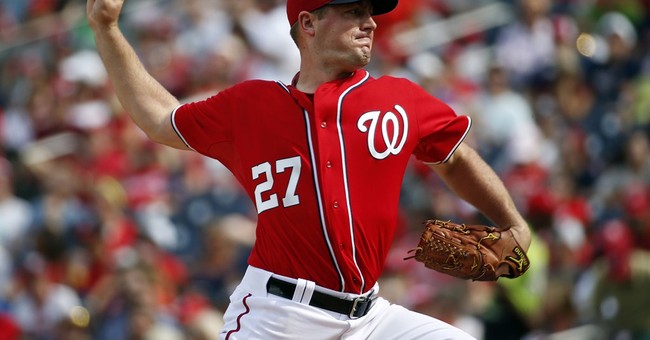 My youngest son, the world's greatest fan of the Washington Nationals, has lodged this indictment against me on multiple occasions. The scene of the crime is always the same: We are at Nationals Park. It is the third or fourth inning. A Nat's pitcher is mowing down opposing batters.

"Strasburg has a no hitter going," I might say. My son will then roll his eyes and throw up his hands.

Or I might say: "Gio has not let a single batter reach base."

That elicits a deep sigh from my son. "You just jinxed it, again, Dad."

Of course, he is always right. Invariably, someone will then slap a slow grounder just beyond the reach of the pitcher -- and between the shortstop and second baseman.

Or worse, smack one over the fence.

With such prior offenses in mind, I kept my mouth shut last Sunday when Jordan Zimmerman walked to the mound to pitch the top of the fifth against the Miami Marlins. He was pitching a perfect game, and I had no intention of jinxing it.

Yet any rational person watching the first at bat in Sunday's game would not have bet Zimmerman would make it to fifth inning with a no-hitter intact -- let alone a perfect game.

For starters, this particular baseball game appeared to be as meaningless as a professional sporting event can get. It was the last game of the regular season. The Nats had already won their division. They had clinched home field advantage through the playoffs. They did not "need" to win.

A couple of weeks earlier I had bought two good tickets to the game (an excellent deal on StubHub) because I anticipated it would be extraordinarily difficult and expensive to get tickets to the playoffs -- and because I thought my son would appreciate seeing the Nats' last regular season game, especially if he could not attend the playoffs.

Miami's Christian Yelich was the first batter. He fouled off three pitches, took two balls, fouled off two more, took ball three, then fouled off another.

Zimmerman's next pitch was a fastball over the plate. Zelich hit it hard to right--but Bryce Harper angled left and caught it.

Considering it took Zimmerman ten pitches to get this first out, it looked like he was on his way to exhausting his pitch count by the fourth inning. But as he took the mound in the fifth, he still had that perfect game going -- and I did not say a word.

On the second pitch of that inning, Marlins right fielder Garrett Jones smashed a hard line drive parallel to the first baseline -- and straight into the glove of Tyler Moore, who had pitch run for starting first baseman Adam LaRoche in the fourth.

Two pitches later, Marlins left fielder Reed Johnson sent a rocket down the third baseline. Kevin Frandsen, who had replaced starting third baseman Anthony Rendon in the fourth, reached out and nabbed what might have been a double.

Miami first baseman Justin Bour now came to the plate. A native of Northern Virginia, he was playing to a hometown crowd -- for the wrong team.

He took two balls, fouled a third, and then took another for ball three.

One pitch out of the strike zone now would end the perfect game.

Bour hit another foul. Then another.

How many consecutive pitches could Zimmerman throw that would evade Bour's bat but not the strike zone?

The next pitch was over the plate, but a bit low. Bour took first base on a walk. Zimmerman's perfect game was over.

But I had not jinxed it.

Three pitches later, Marlins catcher J.T. Realmato smashed a liner to the right of shortstop Danny Espinosa, who had come in to replace starting shortstop Ian Desmond. Espinosa reached out and grabbed it for out number three.

Five innings were done, and Zimmerman was still throwing a no hitter.

When the Nats came out for the top of the sixth, my son said subtly: "People are starting to notice." And they were.

The 35,085 attending this game were quieter than they had been in the early innings. They focused on every pitch.

They knew they had a chance to witness a bit of baseball history -- and that chance could vanish with a single swing of the bat.

Zimmerman kept it going to the top of the ninth. By then, the entire defense behind him had changed from the starting lineup. The last switch replaced left fielder Ryan Zimmerman -- just returned from a torn hamstring -- with 6-foot 4-inch rookie Steven Souza Jr., who was appearing in only his 21st major league game.

The first Marlin grounded out to second. The second flied out to center. Zimmerman needed only to get Christian Yelich -- the man it took 10 pitches to retire for the first out of the game - to complete his no hitter.

The undeniably symmetry intensified the suspense.

On a two-one count, Yelich lined the ball toward the gap in left center.

"I thought that was a double for sure," Zimmerman said after the game.

So did most of the rest of the people in the ballpark. But not rookie Souza. He raced back to his left chasing the seemingly uncatchable ball. He leapt, reached up, fell onto the turf and rolled over -- holding the ball he had miraculously caught.

"Sometimes when you come in the game, the ball finds you," he reportedly said later.

Driving home, the world's greatest Nats fan and I listened on the radio to manager Matt Williams' press briefing. "All in all, that's probably the perfect baseball day," he said.