Will John Roberts Decide a 'State' Is Not a 'State'? 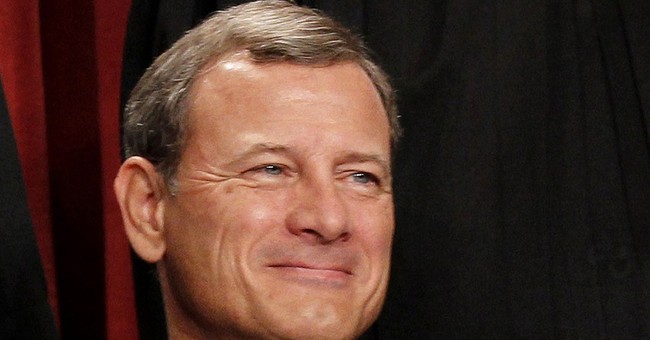 Trending
The Supreme Court may soon need to decide whether the federal government can be considered a "state" in our federal republic in the same sense that Iowa, Wyoming and Wisconsin are states.

On the face of it, this question may seem absurd. In fact, given any level of reflection, it is absurd. The federal government is not one of the states.

But this absurd question was at the heart of Halbig v. Burwell, decided this week by the U.S. Court of Appeals for the District of Columbia, and it could soon become a defining issue in American life.

Section 1311 of the Affordable Care Act, the court explained, provided for "each State" to establish an exchange to sell health insurance.

However, the federal government cannot force a state government to create a health insurance exchange.

So, Section 1321 of the ACA empowered the secretary of Health and Human Services to directly create an exchange, under the authority of the federal government, in those states where the state government exercised its right not to create one.

But then the lengthy and complicated law did an interesting thing. It provided that people earning up to 400 percent of the poverty level could get a federal subsidy to buy health insurance -- so long as they bought that insurance in an exchange "established by the State under Section 1311."

The law did not extend the federal subsidy to people who make more than 400 percent of the poverty level, or who buy their insurance some place other than in an exchange "established by the State under Section 1311."

For example, the law did not include language providing a federal subsidy to people who bought their insurance in an exchange established by the federal government under Section 1321.

But the actual language of the law proved no obstacle to the Internal Revenue Service. When the IRS wrote the regulation governing the federal subsidies that people can get to buy health insurance under the Affordable Care Act, it simply pretended the law extended subsidies to people buying health insurance on federal exchanges as well as state exchanges.

Under the Affordable Care Act, the Appeals Court explained this week, the penalty that enforces the individual mandate to buy insurance does not apply if a health insurance plan would cost more than 8 percent of a household's income. Similarly, the provision that penalizes companies that employ more than 50 people if they do not buy insurance for their employees does not apply unless an employee of the company qualifies for the government subsidy to buy insurance in an exchange.

Without the exchanges and their subsidies, far fewer people would be subject to both the individual and employer mandates. Had the IRS not unilaterally extended to the federal exchanges the subsidies that the language of the law only extends to state exchanges, those individuals and businesses would be free of the mandate.

In Halbig v. Burwell, a group of employers and individuals sued the federal government, arguing that the IRS regulation contradicted the plain language of the ACA as passed by Congress and signed by President Barack Obama.

Two members of a three judge panel on the Appeals Court did a very simple thing: They read the law and the IRS regulation. They then determined the regulation did something the law did not authorize: It provided subsidies to people buying insurance on the federal exchanges.

"We reach this conclusion, frankly, with reluctance," wrote Judge Thomas Griffith, who was joined by senior Judge Raymond Randolph.

"At least until states that wish to can set up exchanges, our ruling will likely have significant consequences both for the millions of individuals receiving tax credits through federal exchanges and for health insurance markets more broadly," he wrote.

"But, high as those stakes are, the principle of legislative supremacy that guides us is higher still," said the judge. "Within constitutional limits, Congress is supreme in matters of policy, and the consequence of that supremacy is that our duty when interpreting a statute is to ascertain the meaning of the words of the statute duly enacted through the formal legislative process. This limited role serves democratic interests by ensuring that policy is made by elected, politically accountable representatives, not by appointed, life-tenured judges."

In his infamous opinion deciding that the individual mandate was constitutional, Chief Justice John Roberts wrote: "The text of a statute can sometimes have more than one possible meaning."

Now, the question for John Roberts may be: Is the federal government sometimes a "state" just like Texas or Rhode Island?