Is Obama's Use of Military in Libya Constitutional? 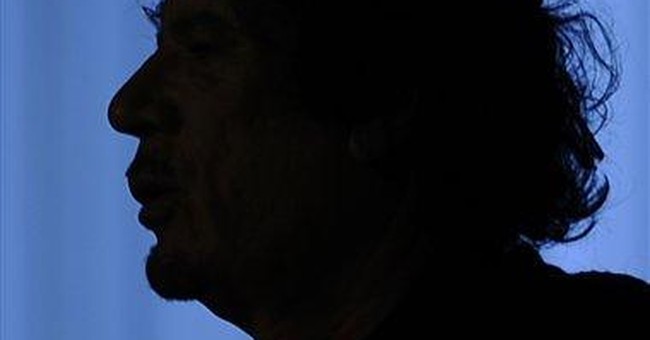 Leave aside for a moment whether it was wise for President Obama to order our military to intervene in Libya's civil war, siding with rebels we know little about against a dictator who has sponsored terrorism against us.

A more fundamental question comes first: Did Obama have constitutional authority to do it? President Washington's actions counsel otherwise.

In responding to Indian raiders, Washington repeatedly declined to order offensive -- as opposed to defensive -- military action because Congress had not approved it, as he believed the Constitution required.

In 1792, William Blount, governor of the territory that became Tennessee, wrote to Secretary of War Henry Knox complaining of aggression by Chickamauga Indians.

"The Congress which possesses the powers of declaring war will assemble on the 5th of next Month -- Until their judgments shall be made known it seems essential to confine all your operations to defensive measures," Knox wrote Blount, as recorded in Louis Fisher's excellent book "Presidential War Power."

A month later, as Fisher notes, Knox wrote Blount: "All your letters have been submitted to the President of the United States. Whatever may be his impression relatively to the proper steps to be adopted, he does not conceive himself authorized to direct offensive operations against the Chickamaggas. If such measures are to be pursued they must result from the decisions of Congress who solely are vested with the powers of War."

A year later -- in a letter Fisher also cites -- Washington personally addressed the issue in a letter to South Carolina Gov. William Moultrie. The problem now was what Washington called "the refractory part of the Creek Nation."

"The Constitution," Washington advised Moultrie, "vests the power of declaring war with Congress; therefore no offensive expedition of importance can be undertaken until after they shall have deliberated upon the subject, and authorized such a measure."

Washington was the original originalist.

As reflected in Max Farrand's Records of the Federal Convention and noted in Fisher's work, the Framers made clear they were giving Congress, not the president, the authority to initiate hostilities.

On June 1, 1787, James Wilson, whom Washington would later name to the Supreme Court, said, according to James Madison's notes: "He did not consider the Prerogatives of the British Monarch a proper guide in defining the Executive powers. Some of these prerogatives were of a Legislative nature. Among others that of war & peace &c."

On Aug. 17, 1787, the convention debated the draft of the war power, which gave the president no authority at all to initiate hostilities. It said Congress shall have the power "to make war."

Early in the debate, South Carolinian Pierce Butler did suggest empowering the president to start wars. "He was for vesting the power in the President who will have all the requisite qualities, and will not make war but when the Nation will support it," Butler said, according to Madison's notes.

Madison then joined Elbridge Gerry of Massachusetts in proposing an amendment that would give the president the authority to use force without congressional authorization only when necessary to counter a sudden attack.

Roger Sherman of Connecticut agreed with Madison and Gerry that the president "shd be able to repel and not to commence war," but wanted to keep it that Congress shall have the power to "make" war.

Gerry then registered shock at Butler's suggestion that the president be given the power. "Mr. Gerry never expected to hear in a republic a motion to empower the Executive alone to declare war."

George Mason, Washington's Virginia neighbor, expressed a similar view. "Mr. Mason was agst giving the power of war to the Executive, because not (safely) to be trusted with it; or to the Senate, because not so constructed as to be entitled to it. He was for clogging rather than facilitating war; but for facilitating peace. He preferred 'declare' to 'make.'"

The convention voted for Madison and Gerry's amendment, leaving the president the limited power to "repel sudden attacks." The Constitution gave Congress the power "To declare War, grant Letters of Marque and Reprisal, and make Rules concerning Captures on Land and Water."

In Federalist 69, Alexander Hamilton explained that the president's power as commander in chief "would amount to nothing more than the supreme command and direction of the military and naval forces, as first General and admiral of the Confederacy, while that of the British king extends to the declaring of war and to the raising and regulating of fleets and armies -- all which, by the Constitution under consideration, would appertain to the legislature."

As for the wisdom of Obama's intervention in Libya: Obama was not repelling a sudden attack on the United States. In announcing his move on Libya, he did not cite our Constitution. He said "the writ of the international community must be enforced." Had Obama submitted his plan for congressional approval, as our Constitution demands, it would have been subject to review not by foreign governments but by 535 Americans who themselves would be subject at election time to the wisdom of our whole people.