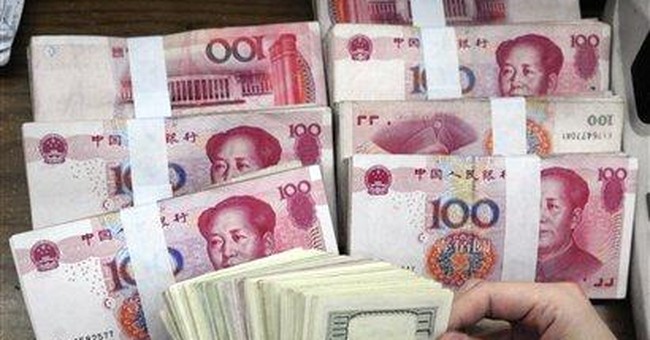 One of the dullest documents the federal government ever published includes information every American needs to know. It is the Congressional Budget Office's analysis of President Barack Obama's new fiscal 2011 budget proposal, and it predicts a massive escalation in government debt that could change our way of life forever.

"They literally crash the U.S. economy, if these kinds of deficits that he's proposing persist," Rep. Paul Ryan of Wisconsin, ranking Republican on the House Budget Committee, told me of the deficit numbers the CBO is now projecting as a result of Obama's budget plan.

The CBO released its report a week ago Friday -- a day when Washington politicians often reveal bad news. It analyzed the 10-year trends that would be set in motion by the second annual federal budget drafted by the Obama administration.

Between 1945, when World War II ended, and 2009, when Obama came to office, the largest annual deficit the U.S. ran in dollar terms was the $458.5 billion deficit that President Bush and a Democrat-controlled Congress ran up in 2008. No deficit in the post-World War II era ever remotely approached a trillion dollars.

Then, in 2009, the federal government ran up a record $1.412 trillion deficit that equaled 9.9 percent of GDP. The politicians who contributed to this deficit -- President Bush, then-Sen. Obama (who supported the bank bailout), the Democrat-controlled Congress (that approved all the spending bills) and newly inaugurated President Obama (who signed a $787 billion stimulus bill during fiscal 2009) -- adopted a Keynesian excuse for their wild spending: The economy was in a recession, and borrowing and spending, they argued, would stimulate the economy.

But now, according to CBO's new report, President Obama and a Democrat-controlled Congress are in the process of running up a $1.5 trillion deficit for fiscal 2010. That equals 10.3 percent of GDP, making this the first year since World War II that the federal government has run a double-digit deficit.

Under Obama's plan, the federal government will never again see an annual deficit as small as the $458.5 billion of 2008. His smallest annual deficit would be $724 billion in 2014. After that, the annual deficit would head ever higher and never look back, passing the $1 trillion mark again by 2018, and reaching $1.25 trillion by 2020, the last year calculated by the CBO.

As the government borrows more and more under Obama's budget plan, it will need to pay more and more interest to cover its growing debt. Over the next 10 years, according to CBO, the government's annual net interest payments will almost triple as a percent of GDP, climbing from 1.4 percent to 4.1 percent. By 2020, thanks to the Obama budget, the government's annual interest payments will take up a larger share of our national economy (4.1 percent) than the average annual deficits took up (3.4 percent) in the profligate Bush years.

Redistributionist welfare-state programs, primarily Social Security and Medicare, are the main drivers behind accelerating government borrowing and spending. Obama's nonsensical answer to the fiscal problem they pose is to create a new and bigger redistributionist welfare-state program, a national health care system in which the federal government will subsidize health insurance for everyone earning up to 400 percent of the poverty level.

Soon, politicians in Washington will not be able to tax and borrow enough to pay for the entitlement programs they and their predecessors have created without breaking the economy. Or as Rep. Ryan said, "They literally crash the U.S. economy, if these kinds of deficits that he's proposing, persist,"

Today, the welfare state is sustained by what the government can take from your hard-earned paycheck and what it can borrow from willing lenders. Tomorrow, your paycheck will have no more to give, and lenders will no longer be willing.