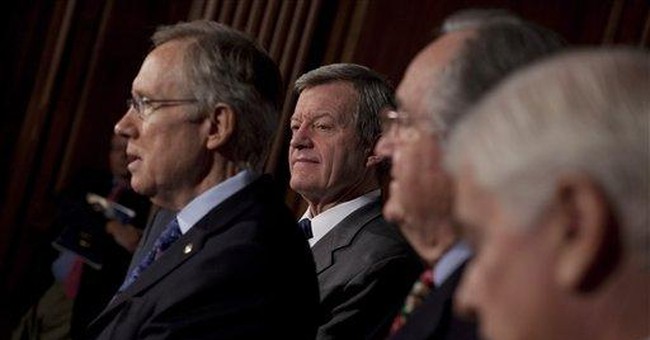 The Congressional Budget Office's analysis of the final Senate health care bill indicates it would slap a mandatory annual fee of about $15,000 on middle-class families that earn an annual income greater than 400 percent of the federal poverty level ($88,200 for a family of four) and are not provided with health insurance by their employer.

On Dec. 19, the CBO sent a letter to Senate Majority Leader Harry Reid, D-Nev., analyzing the fiscal impact of the bill the Senate is poised to vote on before Christmas.

The CBO analysis cites five basic facts about the bill that acting together would deal a devastating financial blow to many middle-class families if the bill is enacted and enforced as written.

Here are these facts:

Fact 1: You will be forced to buy health insurance.

Page 1 of the CBO's letter to Reid says, "Among other things, the legislation would establish a mandate for most legal residents of the United States to obtain health insurance"

Fact 2: You will be eligible for a federal subsidy to help you buy health insurance, but only if you earn less than 400 percent of the poverty level ($88,200 for a family of four), your employer does not offer you coverage and you purchase a government-approved plan in a government-regulated insurance exchange.

Page 7 of the CBO's letter to Reid says: "The bill also would establish new insurance exchanges and would subsidize the purchase of health insurance through those exchanges for individuals and families with income between 133 percent and 400 percent of the federal poverty level. ... As a rule, full-time workers who were offered coverage from their employer would not be eligible to obtain subsidies via the exchanges."

Fact 3: Your employer will not be required to offer you coverage, and will face a maximum fine of $750 per worker per year if it does not.

Page 7 of the CBO letter to Reid says: "In general, firms with more than 50 workers that did not offer coverage would have to pay a penalty of $750 for each full-time worker if any of their workers obtained subsidized coverage through the insurance exchanges; that dollar amount would be indexed."

Fact 4: Your insurance provider will face new federal mandates that will increase its cost for any plan it offers you.

Page 7 of the CBO's letter to Reid says, "Policies purchased through the exchanges (or directly from insurers) would have to meet several requirements: In particular, insurers would have to accept all applicants, could not limit coverage for pre-existing medical conditions, and could not vary premiums to reflect differences in enrollees' health."

Fact 5: Your family insurance plan -- if your employer drops your coverage and you are forced to buy it on your own -- will cost about $15,000 per year when the legislation is in full force in 2016.

Page 19 of the CBO letter to Reid says the average premiums for insurance plans under the final version of the bill should be "quite similar" to the estimates the CBO and Joint Committee on Taxation made in a Nov. 30 letter to Sen. Evan Bayh, D-Ind.: "Although CBO and JCT have not updated the estimates provided in that letter, the effects on premiums of the legislation incorporating the manager's amendment would probably be quite similar." Page 6 of the CBO's letter to Bayh said: "Average premiums per policy in the nongroup market in 2016 would be roughly $5,800 for single policies and $15,200 for family policies under the proposal."

Where does this leave a mom and dad with two children and an annual income greater than $88,200? It leaves them without employer-based health insurance and facing a federally mandated $15,000-per-year insurance bill.

If this legislation is not stopped now, there will surely be a popular rebellion when the insurance mandate hits in five years.

When that happens, the liberals will not say: We made a mistake. We never should have forced families out of their employer-based health insurance and required them to purchase a $15,000 policy. They will say: We told you so. We cannot trust these greedy insurance companies. We need a single-payer system so the government can provide everyone with health care.